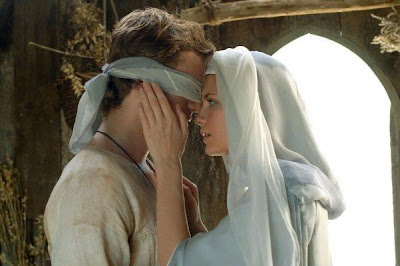 Despite a $40 million budget, a handful of semi-decent sword fights, some stunning Italian countryside backdrops and a fairly well known (if hardly credible) up-and-coming cast, it isn’t difficult to deduce why David Leland’s Virgin Territory was deprived of a theatrical run and quietly sneaked out direct-to-DVD instead; it’s an uncomfortable mess of a movie which throws a lot of two dimensional characters and relationships at the audience, then grows bored of the set-up and finds ever-more implausible excuses to get the girls to disrobe in the hope we’ll forget just how terrible all the other aspects of the script are.

Well, I haven’t. Which is unfortunate for David Leland (as he's about to receive one helluva bad write up), but even more unfortunate for me because I am now scarred with the memory of just how close I came – on multiple occasions – to turning this appalling tat off. None more so than while watching two prick-teasing milkmaids bring a cow to milk over the faces of two up-for-it Florentines… Seriously, that wasn't innuendo. Virgin Territory is no romantic period drama; it's more comparable to one of the latter American Pie sequels mixed with groan-inducing Carry On... style “humour” (and I use that term loosely) – in the 14th century.

Narrated by angel-arse-painter-masquerading-as-a-priest Alessandro Felice (Rupert Friend – quirky, inane), the film's sketchy plot concerns the beautiful Princess Pampinea (Mischa The O.C. Barton – expressionless), orphaned after the death of her parents to the plague, and the decision she must make regarding who she should marry: her betrothed suitor from across the seas, Count Dzerzhinsky (Matthew Rhys – flamboyant), rich local baddie old enough to be her father, Gerbino De La Ratta (Tim Roth – slumming it), or handsome and dashing rogue – and, hint hint, MALE LEAD – Lorenzo (Hayden "Anakin Skywalker" Christensen – unemotive)? Hmmmm, I wonder...

Surprisingly, it still takes Pampinea over ninety cringeworthy minutes to make the most obvious decision ever, as she and a band of faceless, randy youngsters make their way across Italy to escape the plague ravishing the city, getting into all manner of farcical, sexual escapades on their travels. As you do. Lorenzo falls out of a tree and pretends to be death and mute (!) so that a local monastery will hire him as their gardener and he can have his way with the sex-starved nuns; laddish Ghino (Ryan Cartwright) is so obsessed with losing his virginity he dreams of angelic winged phallus's while he sleep-humps air; feisty redhead Filomena (Rossalindel Halstead) escapes from becoming a sex slave to a travelling circus by making the men drop their trousers and pegging it when they fight over which size-order they should sleep with her in... *sigh* At one point there is even a misplaced cameo from David Walliam's peddling his Lou from Little Britain schtick... It really speaks volumes that this was high brow comedy compared to the puerile depths Virgin Territory waded at, mainly because it provided two minutes when the sorry excuse for a script wasn't obsessed with talking about or depicting sex...

Christensen and Barton have zero on-screen chemistry, Tim Roth looks embarrassed by the dreck he is forced to read and only Matthew Rhys arrives at the end credits with a modicum of pride intact, delivering his over-the-top lines with gusto. The plot is rambling but inconsequential, with players making the most ludicrously uncharacteristic decisions just to force a risque scenario. At one point, beauty Elissa (Kate Groombridge) turns up randomly in a lake, just so she can be seen naked and meet a passing Dzerzhinsky and *gasp* fall in love with Pampinea's cast off. Well, there couldn't possibly be two minor characters left out of the happy-ever-after conclusion... Shakespeare this ain't. Hell, this even falls short of capturing a pinch of the fun or charm of 80s cult The Princess Bride, which David Leland is clearly inspiring to imitate. Pity his tongue is more interested in getting into all the damsel's knickers than it is in being in his cheek.