I Know You Got A Voice, Why You Don't Use It? 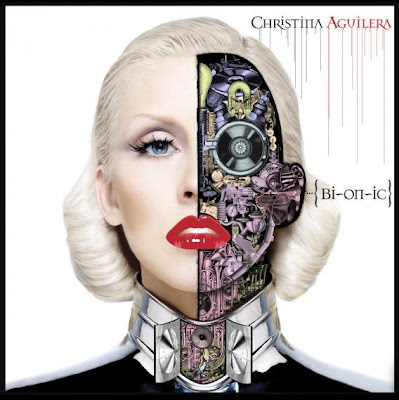 In her powerful, soaring singing voice, Christina Maria Aguilera already has a power beyond ordinary, so quite why, when creating her fourth studio album, her army of newly-appointed “trendy” producers/co-writers felt the need to diminish the impact of her tremendously talented timbre with layers of blips, bleeps, bangs and beats is beyond me. Don’t misunderstand me; I adore an electro vibe to my music – just not at the cost of what makes an artist unique. Darren Hayes found the perfect balance between tune and tone with the extraordinary epic This Delicate Thing We’ve Made (2007), alas, in the case of Bionic; these artificial electromechanical devices have certainly not increased Xtina’s human powers, rather reduced her to a personality-void robotic karaoke machine.

Throughout her chameleonic 11 year career, Xtina has never rested long on one particular musical (or fashion) style. Unsurprisingly, her latest incarnation is unlike anything she has done before, though not for the better. The antithesis of focused, personal and relatable zenith Stripped (2002), Bionic is a busy, opulent, distended mess of sex talk, swearwords, fashion tips, brags and taunts. In other words: it’s hollow guff which makes a lot of noise saying fuck all. Yep, I swore. If you want to listen to Bionic, you had better get used to it, because being foulmouthed is clearly the epitome of maturity... I’m not simply referring to fanbase-splitting first single “Not Myself Tonight” (which, surprisingly, I truly liked, S&M video aside), as this is the case on a number of the album’s uptempo beasts. 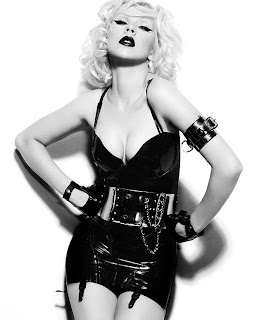 The biggest stars should be setting the trends as they expand their legacies, not following them; therefore it is disappointing that Bionic feels like a regression both musically and lyrically, as well as a succession to a style of ‘cool’ music so divergent from everything Xtina has done before. For a woman who is now a wife and mother to be acting like a vapid, hormonal chav with tourettes is frankly embarrassing. Don’t even get me started on the deplorable “Woohoo” (featuring Nicki Mina), which sees the diva boast about how much we want to taste her lady parts (!!) in the same taboo-teasing way as the Pussycat Doll’s “Beep”, but without a modicum of the charm.

Bionic's 18-track first disc also suffers from inexcusable imbalance: a wild and offensive slew of eight club bangers leave you gasping for a respite from the audible onslaught, before a run of four ballads (and two unnecessarily individually-tracked skits) grind the pace to a halt. The tempo is ramped up for a blistering and purportedly empowering trio of tosh to round out the pack, with album closer and competitor for worst song (it’s a close call), “Vanity”, leaving us with such cringe-worthy boasts as:

I’m not cocky
I just love myself… bitch
Mirror mirror on the wall
Who’s the flyest bitch of them all?
Never mind I am (that bitch is so fucking sexy)

While the slower and more passionate numbers recapture a hint of the spark which made the public fall in love with the former teen star (the Linda Perry penned “Lift Me Up” is stunning, if not quite as memorable as number one single “Beautiful”), they would have been better placed interspersing the repetitive and distasteful trash that proceeded them rather than grouped together like a separate entity of secondary importance. Of the faster tracks, “Prima Donna” is a standout, if only because it doesn’t allude to sex every couple of lines. Oh, and it includes an (uncredited) interpolation of The Jackson’s “Can You Feel It” which is a truly commanding classic.

Ironically, four of the five tracks on disc two of Bionic’s {DELUXE EDITION} are stronger than 90% of the tripe on the main album. “Monday Morning” grabbed me instantly with its “Billie Jean”-like bass line and funky charm, while “Birds of Prey” is haunting in the fashion of Madonna's "Frozen", and “Stronger Than Ever” is an inspiring, melodious tunes. Only madcap 2nd track “Bobblehead” failed to impress me, with Xtina channelling her inner-Stefani and integrating an irksome airhead impression to intentionally and ‘ironically’ have a dig at vacuous gold-diggers with such witticisms as:

High brow stuff, this. Alas, this is the overriding problem with Bionic; far too often Aguilera opts for cheap, juvenile thrills over genuine, relatable substance, giving the whole album an artificial and overproduced glaze as if the wife and mother is endeavouring to appear sexy, edgy, fashionable and down wit da kids. Regrettably, the 29 year-old diva comes off as inauthentic and desperate with an uneven hodge-podge of an album mired by an excess of second-rate pap. Whatever happened to the Genie in a Bottle?


CR@B Verdict: There are a smattering of gems in this bloated opus, unfortunately you have to wade through heaps of vulgar, tacky rot before you reach the riches, and I wouldn’t blame you for tiring of the charade long before that. Artificial and inauthentic; Bionic’s robotics left me cold.
**
Created by ~ CR@B Howard ~ at 10:07