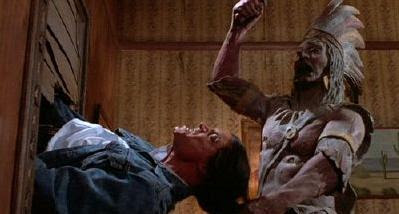 Five years after George A. Romero and Stephen King brought us five tales of jolting terror in 1982's Creepshow anthology, the masters of horror returned to bring us another issue of camp comic scares presented by demonic storyteller The Creep (Tom Savini). Second time around Romero took screenplay duty and Creepshow's cinematographer, Michael Gornick, was promoted to director. Budget restrictions (what more should we expect when indie auteur Romero is involved?) saw the original film's five strip set-up reduced to a trio of King-inspired shorts.

A cartoon wraparound bringing back Billy (Domenick John), the avid reader of the eponymous tome from the first film, interjects the live-action stories with a clichéd story of bullies never prospering... with giant Venus Flytraps. Given the film's graphic inspiration, it was a nice idea to incorporate hand-drawn animation, and I fully accept that these serialised skits would make the most of their artistic (and budgetary) freedom, but the moralistic story felt far too childish and ridiculously OTT, and it lessened the impact of the more mature – though equally unrealistic – live-action vignettes. And that's saying a lot...

Old Chief Wood'nhead: The wooden statue of a Native American (Dan Kamin) comes alive to deliver vengeance for an elderly couple needlessly murdered by a gang of lowlife thugs in a bungled raid on their southwest store.

This first story starts surprisingly slowly, allowing the audience to warm to Ray (George Kennedy) and Martha Spruce (Dorothy Lamour), a kind-hearted and hard-working couple you can't help but admire. This bond makes their slaughter at the hand of vain, delusional ringleader Sam Whitemoon (Holt McCallany) and his braindead cohorts all the more cruel and hard to watch. The lengthy burglary scene leaves little time for the Chief's bloody retribution to have much impact, and the majority of his rampage is only shown in silhouette or off screen (such as Sam's apt demise). Also: what's the point of having a possessed wooden bodyguard if you have to die before he step's off his podium? A great concept then, but "Old Chief Wood'nhead" was averagely executed.

The Raft: Four disposable teens with hackneyed personalities (jock, slut, shy girl and eco-warrior) take an out-of-season trip to a lake to smoke weed, swim in the freezing waters and get laid on the titular wooden device. However, an unidentified blob monster has other plans and strands them in the middle of the lake before picking them off one by one and dragging them under the surface...

The weakest of the three segments, “The Raft” is let down in three key areas. Firstly, by a supernatural predator which looks more like a few old plastic bags floating in the river then the “oil slick” it keeps getting mistaken for. Secondly, I appreciate that the teenagers are meant to be naïve and they are playing clichés of the helpless victims who always get killed off, but when even the nicest and most “normal” guy, Randy (Daniel Beer), fondles his dead mate’s girlfriend while she sleeps, having just seen two of their friend’s murdered, I failed to have an iota of sympathy for any of them. Thirdly, the plot is as thin as a line drawing: the monster is never explained, the characters fail to think up an escape plan and the whole story is terribly one-sided. “The Raft” suffered from a lack of substance or plot progression; the kids don’t even attempt to see if their alien adversary has a weakness, preferring to simply wait it out until death. Good plan(!)

The Hitch-hiker: Businesswoman Annie Lansing (Lois Chiles) is in a hurry to drive 20 miles in an impossible 7 minutes to avoid her rich and punctual husband (Richard Parks) from suspecting her infidelity with a male gigolo (David Beecroft). Losing control at the wheel, Annie runs down a hitchhiker (Tom Wright), panics and leaves him for dead. Only he isn’t prepared to let her get away with it… "Thanks for the lift, lady!"

Ramping up the tension and the gore-factor, “The Hitch-hiker” is far and away the most satisfying of the three tales: a paranormal fable of revenge where we are rooting for the bloodied and mangled remains of a man wronged. It is also successful in playing with our sense of reality – has Annie’s state of shock lead her to hallucinate the disturbing events? – before justice is, ahem, wheeled out. Though quite how Annie ever made it home before her husband is beyond me...?


CR@B Verdict: As fun as this comic book horror can be, Creepshow 2 offers little depth to its lightweight chills. The animated intermissions also negate the live-action terror, with only “The Hitchhiker” delivering any darkness in an otherwise bright, camp extravagance.
**.5
Created by ~ CR@B Howard ~ at 14:25