Lost In a Live Odyssey 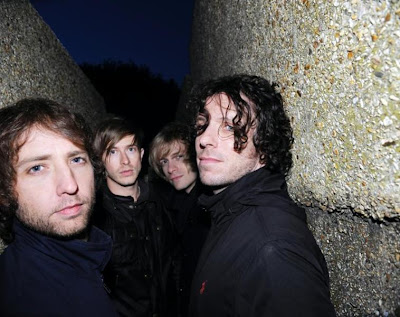 BUDGET DELAYS: “Delays: 9:30-10:15” proclaimed the chalkboard on the door of the Norwich Arts Centre’s refurbished-church auditorium ahead of last night’s 8pm opening. At a bargainous £10 a ticket (£11 on the door), I could hardly moan at a 45 minute set, well aware of the passion and vigour the boys from Southampton put into their exuberant and energetic performances. Yet on the previous five occasions I have been wowed by the genre-straddling band live since 2006, they have always played for more than an hour, and with more songs than ever in their repertoire ahead of this month’s release of fourth album Star Tiger, Star Ariel, a slim line runtime seemed somewhat contradictory.

Contradictory and, as it transpired, utter bollocks, as brother’s Greg and Aaron Gilbert, Colin Fox and Matthew “Rowly” Rowlinson eventually stepped off the stage at gone 10:40pm, luminous with sweat and pride after rocking the 300-plus crowd with a powerhouse set chock full of crowd-pleasing hits (“Nearer Than Heaven” which couldn't have been more apt given the venue, “Long Time Coming”, “Valentine”), fan favourite gems (“Lost In A Melody”, “Friends Are False”), surprise bombshells (“Bedroom Scene”, “Panic Attacks”) and glorious new delights (“Lost Estate”, “In Brilliant Sunshine”). Value for money or what?! Pity there was no merchandise for sale amid the carved stone pillars, though, as the band-designed t-shirts always make a fab addition to my wardrobe.

AUDITORY HIGHLIGHTS: As soon as the synth sounded out around the cavernous, high-ceiling hall for the pulsing intro to euphoric opener (and personal favourite) “Lost In A Melody”, I was ecstatic with glee, and the elation did not relent until long after we left the Norfolk province. This gig-induced high makes any endeavour to remember a full and chronological set list kinda impossible (I only had two pints all evening, I swear!), but needless to say, many-a-song was greeted with a roaring cheer and air-punch from yours truly. 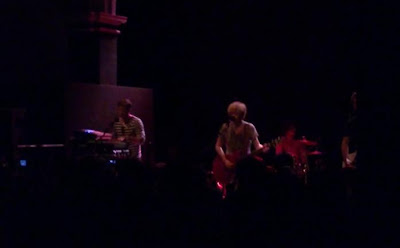 “Friends Are False” was the only inclusion from 2008’s unjustly marginalised Everything’s The Rush, but rousing B-side “Panic Attacks” from the Love Made Visible EP (2007) went some way to addressing the issue. “Bedroom Scene” is something of a live rarity, a swirling, poignant album track from debut Faded Seaside Glamour (2004), and who could resist a dig at chavs in the form of “This Town’s Religion”? Not I.

PREVIOUSLY UNSUNG: With the album release being delayed (*titter and guffaw*) until after this tour has wrapped, the band have been previewing new tracks to audiences who haven’t yet heard them. This can be something of a gamble when played alongside celebrated hits and I’m sure wasn’t quite the idea when the tour dates were booked months in advance (that’s the unpredictability of the music industry for ya). Nevertheless, the new material was well appreciated by the attentive Arts Centre crowd (even if we couldn’t sing along) and our appetites were sufficiently whetted prior to June 21st with premieres of “Lost Estate” and “In Brilliant Sunshine” alongside the ethereal opener (and complimentary download) “Find A Home (New Forest Shaker)” and stunning new single “Unsung” (released next Monday), for which promotion was provided.

ENCORE HECKLES: As the majestic and anthemic stomper that is “Valentine” came to a heady close, frontman Greg announced that normally the band would leave the stage momentarily before returning for an encore, however tonight he would consult with drummer and seemingly appointed “Cap-i-tan” Rowly to see whether this theatrical contrivance would be necessary. Turns out it wasn’t and Greg launched his faultless falsetto into the glorious You See Colours (2006) opener “You and Me”, but not before an impatient attendee called out “Hurry up; I’ve got a train to catch!” Greg’s sympathetic reply? “Fuck off then.” Giggles at a gig – what more could you ask for? Ah yes: merchandise…

Alas, tonight’s stop at Haymakers in nearby Cambridge sees the end of this pre-album tour which began in May, but word on the forum is that a post-STSA promo tour is in the works for October (fingers crossed!). Plenty of time for me to memorise the lyrics to eleven more harmonious gems, then – and for the guys to get creative and design some funky album-flavoured t-shirts for me to fawn over!!


CR@B Verdict: A dazzling potpourri of exuberant delights from a band who seriously deserve to be playing bigger venues than a church in Norwich. That said, the intimate-yet-grandiose setting infused the crowd with the band’s colossal fervour, leading to a mighty night all round. Amen.
*****
Created by ~ CR@B Howard ~ at 11:45