Mess With the Bull, You Get the Claws 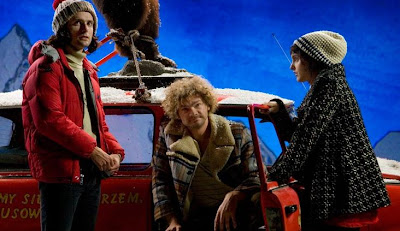 [SPOILERS] Comparisons to BBC's The Mighty Boosh were inevitable given the innumerable crossovers, cameos and similarities in visual style (not to mention the unmissable “From the Director of...” banner emblazoned across every poster and retail copy), but writer and director Paul King's feature length debut is equally comparable to Michel Gondry's surrealist comedy/drama The Science of Sleep (2006), given the melancholic tone ever-present beneath the laughs.

Retelling a pivotal European road trip through the disjointed memories of OCD-suffering hermit Stephen Turnball (Edward Hogg – impressively subtle), Bunny and the Bull is fabulously quirky and imaginative at rendering “Europe” out of the boxed-away possessions that now comprise Stephen's lonely, pill-popping existence. Photographs replace landscapes, restaurant tables are drawn in pen and buildings are constructed out of stacked-up files as reality is shelved and the shy lead joins his intimidating, amoral gambler of a best mate, the ironically named Bunny (Simon Farnaby – irritatingly likeable), on a globe-trotting adventure like no other.

Kooky supporting characters portrayed by the noughties cult British comic talent may clutter the artificial landscape and provide some truly bonkers scenarios along the way (particularly Julian Barratt as tramp Atilla, suckling milk from the teat of a dog named Cow), but the heart of this film is the oft-challenged – but concrete – friendship between the polar lead characters; Bunny may have loose sexual morals but he is always thinking of Stephen's best interests (in his own misjudged way), whereas his love-shy best friend certainly needs the push out of the “Friend Zone” he so reluctantly accepts in furthering his potential relationship with ballsy crab waitress Eloisa (Veronica Echegui).

As the travelling trio arrive in Spain for a fiesta in Eloisa's home town and meet-up with her wild-eyed matador-wannabe of a brother, Javier (Noel Fielding), the film's title finally makes sense and the harsh reality of Stephen's isolated prison of the present punctures the psychedelic fantasy like a bull's horn in the gut. It's a heart-wrenching reveal which is at odds with the pair's playfully juvenile banter, but it skilfully demonstrates that Paul King has the ability to diverge from his Boosh template and grow as a unique and distinctive auteur.


CR@B Verdict: Not just for fans of the Boosh, Bunny and the Bull is a captivating and brilliant visual treat of a road movie which is as sweet and touching as it is zany and bizarre.
****
Created by ~ CR@B Howard ~ at 14:36