A Job to Die For 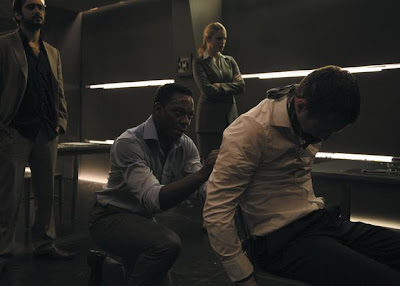 If you thought people were desperate enough to do anything for a job in our current recession-hit era, then you ain’t seen nothin' yet. Exam is a taut, tense and atmospheric low budget thriller set in the near future (“Soon” so the title card reads) which gets a lot of mileage out of literally holing a set of strangers up in a locked room with one objective, then watching them fall apart from behind a blackout screen.

Eight competing candidates from divergent social and ethnic backgrounds, all gunning for the same position at a sketchy, high-powered company; just how far will they go to get their dream job when the one question they must answer is a riddle which demands they band together? An assured and hard-hitting debut from writer and director Stuart Hazeldine, Exam continues to shock and surprise as the eager contenders turn on one another and are one-by-one ejected for breaking the br

As the clock runs down and the blank exam paper still eludes the unnamed careerists, determination turns implausibly ugly in the purportedly lawless confines. Ruthless doesn’t do these guys justice. The solution is a little hackneyed for tingeing the low-fi situation with a science-fiction hue, but Exam is still worth sitting. Let’s just hope this company has a staff counsellor on site - and a darn good lawyer…