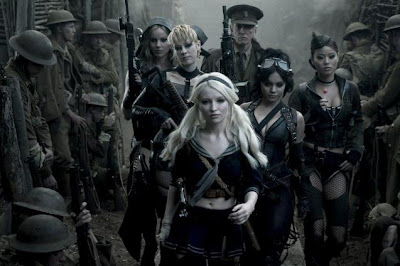 A quick scout online informs me that a “sucker punch” is a blow made when not expected. While the utilization of the phrase as the title of Zack Snyder’s latest overblown CGI-fest is never outright clarified during its duration, it’s clear to me, at least, that the “blow” that was delivered when not expected was the fact that the much-hyped blockbuster just isn’t very good. Either that or we’re all suckers for watching it and deserved to be punched for putting up with such nonsense? I’ll stick with the former.

Not only was I not a fan of Snyder’s previous effort Watchmen, I was also well aware of the avalanche of less than complimentary reviews levelled at his latest high concept fantasy flick. Nevertheless, it looked spectacular and I was curious to check it out, so I went in with an open mind, up for a thoroughly fun (if brainless) popcorn bonanza. Part of me really wanted to be the one positive voice amongst the throng of critical haters. Alas, it hurts me to say – especially about a film so beautifully, flawlessly and painstakingly rendered – that I can’t: Sucker Punch just sucks.

Institutionalised by her sexually abusive stepfather (Plunkett) after a self-defensive retort goes awry, 20year-old Babydoll (Browning) retreats into a dream world that she has control over to get herself through her gruelling tenure. Determined to escape before corrupt asylum orderly Blue (Isaac) can have her lobotomized illegally (and thus unable to report her stepfather's wrongdoing), Babyboll sets out to obtain five items – a map, a key, a lighter, a knife and a mysterious fifth – integral to an escape attempt. 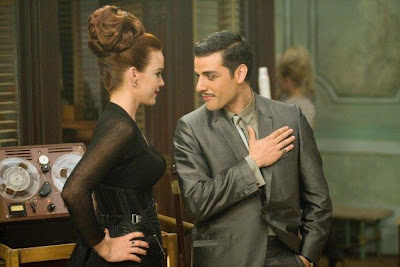 Envisioning the asylum as a seedy brothel in which Blue is the mobster who runs the joint, the group therapist (Gugino) is a dance instructor and the other patients/inmates – Rocket (Malone), Sweet Pea (Cornish), Blondie (Beastly’s Hudgens) and Amber (Chung) – are exploited dancers, Babydoll must corral the other girls into joining her cause and obtaining the necessary objects whilst the staff are paralysed in awe; drooling. Simples, right?

So what we have here is a turgid dream-within-a-dream scenario which plays like a very pretty video game adaptation; all style, gorgeous graphics and not a lot else. You quickly come to realise that there is a dreadfully rigid template to Sucker Punch's “gameplay”: Beat the baddie, complete the level, earn the token and move on to the next stage – but the prize at the end is so shockingly depressing that it makes you question whether escape was actually worth it, and whether “winning” is actually the correct term to use.

Beneath the gloss, Snyder’s hyperactive jumble of a vision not only downplays the appalling brutality of Babydoll’s misery but just utterly confuses. For starters, who the hell is Wise Man? He isn’t a character in the asylum, so does he really exist or is he – as his name suggests – some kind of omniscient guardian angel providing Babydoll with an internalised mentor? Far from providing clarity, his final appearance muddies the conundrum even further by bringing him into the real world – yet still exuding the same all-knowing, ever-helpful attitude.

Furthermore, while there is a clear pan-away to the fantasy battles (the dazzlingly perceptible change in exotic locale also helps), there is little indication of when the Lennox Mental Asylum suddenly becomes a fictitious brothel. Blur the lines between fantasy and reality, by all means, but I questioned if I’d accidentally sat on the remote and skipped a scene, so I can only wonder how long it took some less perceptive viewers to realise we weren’t still in the asylum, especially as all the characters are the same! 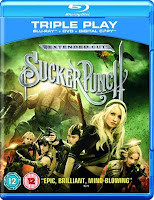 Most disconcerting of all – don’t worry, my rant is nearly at an end – is exactly why an abused young girl would ever feel “safe” in such a sordid scenario where she must wear scantily clad attire and use her body to thrill sleazy men? It just doesn't make sense! Is this supposed to be empowering? I think not. An ironic statement on men’s objectification of women? Hardly – it just comes off as misogynistic, especially as the extended blu-ray cut (available on retail copies only) purportedly re-inserts additional scenes of abuse and violence! Remind me to avoid that barrel of laughs, yeah?


In a CR@B Shell: Noisome, barmy and over-stylised to the point of offensively ostentatious; any poignant message Zack Snyder was attempting to convey was definitely lost beneath the excessive SFX. Even forgoing any emotional depth, Sucker Punch is still a cluttered and confusing mess of a popcorn flick. “Sucky Punch” more like.
aaaaa