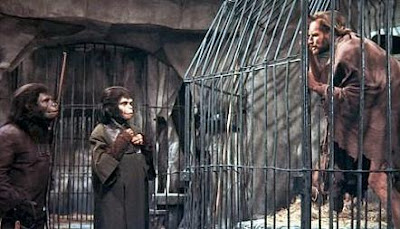 [SPOILERS] With franchise prequel/reboot, Rise..., mere days from release (and somewhat inspired by Film Intel's continuing trawl through the original quintet of films), I thought it was high time I journeyed back to the beginning and revisited our first glimpse of The Planet of the Apes. Over the last 43 years, Frankin J. Schaffner's iconic sci-fi has spawned four theatrical sequels, two television series, a Tim Burton remake and all manner of expanded universe fiction. There’s no denying it: these damn dirty apes are damn popular!

Astonishingly, the slick 1968 production still holds up to this day. The prosthetic ape make-up by artist John Chambers looks just as believable as it did in Tim Burton’s far more extravagant (but far less positively received) 2001 re-Apes, while the plot – based on a 1963 novel by Pierre Boulle – is triumphant in delivering a resounding high-concept allegory in a powerful yet clear narrative.

A quartet of astronauts led by stern alpha male Taylor (Heston) awaken from a long voyage in deep sleep hibernation to find their craft has crash landed on an unknown world in the year 3978AD. Due to time dilation, they have only aged 18 months, but they must come to terms with the fact that everyone they knew on Earth has been dead for centuries. Now they must traverse this sparse, barren, alien landscape if they ever hope to return to what they once called home. 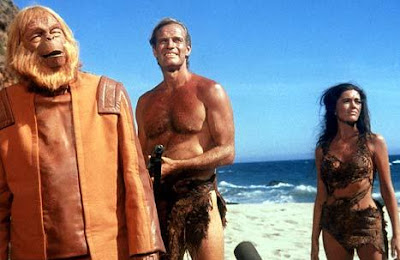 I really admire the steady, almost calm, pacing of this film – and that is in no way a backhanded compliment. Devoting the first 30minutes to a slow desert jaunt is something today's ADHD Hollywood simply wouldn't allow; other than finding a patch of fauna and snapping at one another, bugger all really happens but it lulls the audience into a false sense of security and we obtain great insights into the conflicting personalities of this minimalist cast before the groundbreaking revelations rock their world.

The socially aware subtext cleverly incorporates denouncements of race and class divisions, animal cruelty and the age-old showdown between science and faith – timeless issues which still rage today – yet Planet of the Ape's plot is essentially very simple: Taylor is captured by the dominant apes and caged like a mute, primitive pet until his power of speech convinces certain open-minded simians – animal psychologist Zira (Hunter) and her archaeologist fiancé Cornelius (McDowall) - that he may be the “missing link”; a key to unlocking the secrets of their past, while others – the shady Dr. Zaius (Evans), keeper of the faith – believe Taylor's appearance to be a Pandora's Box which should never be opened...

The sedate and speculative script offers up a feast of perfectly placed and powerfully executed twists and reveals which move the story along terrifically, from the condition of female astronaut Stewart (Dianne Stanley) to Landon's (Gunner) lobotomised zombification. Much to the credit of the film-makers (but the detriment of the climax), the iconic final shot of the Statue of Liberty has embedded itself in public culture (it's even on the front of the DVD case for Zaius' sake!) and it barely registers as a twist anymore – but can you imagine that ending catching you off guard in a cinema in 1968? Now that's a sucker punch!


In a CR@B Shell: Forget about Tim Burton's awkward modern rehash and immerse yourself in a slice of prototypical vintage science fiction. Enjoy either as first rate avant garde eye candy or dig a little deeper to unearth its societal message; Planet of the Apes really is an advanced breed of film-making.
aaaaa
Created by ~ CR@B Howard ~ at 13:04