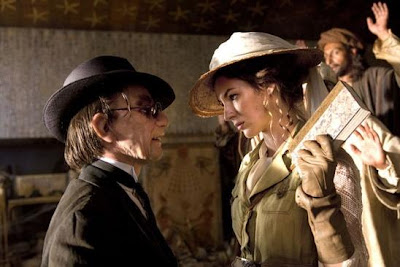 Amalgamating the primary storylines from two issues (and extrapolating various elements from many more) of Jacques Tardi's popular 70's comic strip of the same name, this Luc The Fifth Element Besson passion project is a colourful, audacious and frequently humorous Tomb Raider 1910-style romp which breezes through many a high concept, high energy adventure with assertiveness, flair and a charming dollop of je ne sais quoi.

Amongst the rip-roaring fantasy highlights: a doddering professor (Nercessian) mind-melds with a pterodactyl belatedly hatched from its museum-displayed egg and now free to fly the early 20th century Parisian streets. Meanwhile, our eponymous travel writer and part-time master of disguise (Bourgoin; effervescent) narrowly escapes mummification and incineration while exploring the tomb of Ramesses II, before returning home and resurrecting the long-dead Pharaoh and his well-mannered courtesans so that her bed-bound sister (Clermont-Tonnerre) may be cured of a hatpin-related tennis injury.

It sounds wild and effusive because it is exactly that, and yet Adèle Blanc-Sec exudes a quirky, romantic charm akin to that other language-barrier-crossing kooky French comedy Amelie – not least because it begins with an eccentric voice over introduction. Importantly, whilst never taking itself seriously, Besson's script never lapses into cheap, juvenile spoofery (like The latter Mummy films had a tendency to do; there are no yetis celebrating field goals here!), instead having fun playing with – and subverting – the outlandish fantasy/adventure genre's concepts.

The Extraordinary Adventures... really is a comic book come to life; a live action cartoon if you will, and while the pairing of two largely unrelated adventures does lead to a *slight* lapse in action as the film reaches the final third (exotic Egyptian escapades and pterodactyl panic are replaced by the smaller scale resurrection storyline), the idiosyncratic humour, amiability and unpredictability factor keep you hooked to the very end.


In a CR@B Shell: Don't you dare let the subtitles discourage you from checking out this blindingly bold and universally appealing joy. Besson has his sights set on a trilogy, and with plenty of source material at his disposal, I can't wait to see where he takes Adèle Blanc-Sec next. Highly recommended.
aaaaa