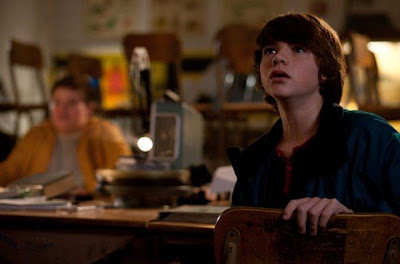 In the (fictional) backwater town of Lillian, Ohio in 1979, young amateur film-maker Charles (Griffiths) cajoles a group of his closest friends and classmates into starring in, and helping him execute, a George A. Romero-inspired zombie movie for inclusion in a local competition. Using the 8mm home movie format of the title, budding director Charles' crucial midnight train station scene is interrupted in disastrously spectacular fashion when a pick-up truck driven by their old Biology teacher (Turman) deliberately drives onto the tracks, derailing a passing military train right before their petrified eyes.

In the flaming aftermath, the crash site is littered with a plethora of curious white cubes, while the US Air Forces' swift attempts to shut down the area and keep the local community in the dark despite a growing number of mysterious phenomena only piques the groups' curiosity: just what was that train carrying – and where has it escaped to...?

A homage to the magic and wonder conjured up by the classic Steven Spielberg adventure films of yesteryear (E.T., Close Encounters, The Goonies – hence the retro setting), with an added injection of Lost mastermind Abrams' trademark head-scratching mystery and a fair dollop of CGI monster madness straight outta Cloverfield; Super 8 is – despite its amalgamated inspirations – a bold and invigorating breath of fresh air in this cluttered and vapid Summer blockbuster season (Transformers: Dark of the Moon, take a bow). 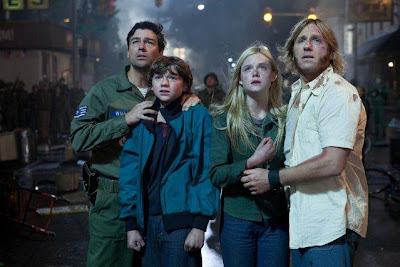 Sitting down in the cinema to watch a film which hasn't already given away its entire plot in an over-excessive, spoiler-heavy marketing campaign is an exciting feeling, evoking in me a sense of wonder which made me feel like a wide-eyed little kid again – a rare feat in this leak-heavy internet era where no work of art is safe from being ruined by the impatient hacker-savvy masses. Beyond this, even during the film, Super 8 still tries its utmost to hide its “surprise reveal”, keeping the treasure just out of shot or behind conveniently placed signposts until deep into its third act.

If I'm totally frank, I must admit that when the treasure was finally revealed and the pieces of the puzzle started fitting together into a coherent picture, I did find myself slightly disappointed. I won't spoil it for those who are yet to watch, but I will say that a saccharine sweet ending straight outta E.T. just seemed too neat and tidy for a film which had derived so much fun from keeping the audience guessing for ninety percent of the running time. One line of contrived dialogue in particular really irked me.

But mild anti-climax aside, Super 8 is by-and-large a sensational and tense sci-fi mystery thriller. As Charles relays to his best friend and number one make-up guy, Joe Lamb (Courtney), as he hands him a rewrite of his ever-changing zombie script: “the train scene is important because it makes the audience care for the characters. You want to see them live because they've got someone who loves them to go home to” – and, heeding his own advise, care for Abrams' characters you unquestionably will.

Protagonist Joe's heartbreaking back story (his mother was killed in a work-related accident just four months ago) and its ramifications for his under-pressure Deputy father (Chandler), first crush Alice (Fanning) and her brutish lout of a dad (Elard) frame the drama and adds considerable and identifiably humane weight to the ongoing out-of-this-world mayhem. Furthermore, these characters act like real people: they bicker, they fight, they argue, they banter and they tease – you'll continually find yourself tittering at the authentically grounded dialogue (particularly from the smart-mouthed kids), and this helps makes the horror all the more personable.


In a CR@B Shell: Surviving a train wreck, dodging the military, uncovering a long-quashed secret – and still these kids find the time to make a zombie movie and be hella funny! It's a pity the climax slightly sullied what was otherwise an exhilarating and unpredictable experience, but I'd nevertheless have no qualms in rewarding Super 8 a super 8/10 – which translates to a respectable 4 ticks outta 5 from this CR@B.
aaaaa
Created by ~ CR@B Howard ~ at 09:00