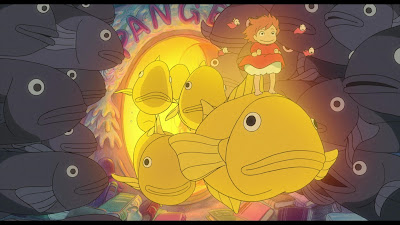 Hayao Miyazaki’s eighth Studio Ghibli masterpiece has taken nearly two years to reach UK shores and – scandalously – was the first film for which he was not nominated for an Academy Award. But don’t let those factors mislead you into thinking this animated reimagining of Hans Christian Anderson's The Little Mermaid is cod awful second rate fish food; Ponyo on the Cliff (to give the film its clumsy Japanese title) is a bright, beautifully rendered fairy tale which will touch, charm and excite children from 5 to 105.

The eponymous Ponyo (voiced by Noah Cyrus on the English dub) is a mischievous goldfish with the head of a child (stay with me here) who longs to see the world outside the aquarium tank in her father’s – the powerful magician Fujimoto (Liam Neeson) – underwater castle. Escaping on the back of a jellyfish, Ponyo becomes stranded on the shore of a small fishing village and is rescued by five year old Sōsuke (Frankie Jonas), who befriends the charming piscine. Having healed a cut on Sōsuke’s hand by licking it, Ponyo uses the boy’s blood to morph into a human girl and evade her father for a second time after he “rescues” her from the human’s who “kidnapped” his daughter. However, in her sophomore escape, Ponyo accidentally releases a flood of powerful magic which causes an imbalance in the world, bringing the moon and stars out of orbit and causing a freak storm.

A furious Fujimoto is persuaded by Ponyo’s mother – Granmammare, the goddess of Mercy (Cate Blanchett) – that all is not lost. She proposes that if Sōsuke can pass a test and prove his love for their daughter, whatever her form, then Ponyo will be granted to live her life as a human and order will be restored to the world once more…

Writing out that synopsis it occurs to be just how utterly barmy this film sounds, but it is surprising how invested you become in these charismatic and loveable characters, despite the high concept world in which they live. The fantastical components do not distract from the humanistic element at Ponyo’s heart, and because of this the film flows wonderfully and never feels disconcertingly "weird". It is closer in tone to the innocence and exploratory escapades of My Neighbour Totoro (1988) than the more menacing threats lurking behind the splendour in Miyazaki's more recent Spirited Away (2001) and Howl’s Moving Castle (2006), yet adults will still find much to admire from Ponyo, without being sickened by the moral virtuosity seaping from its gills.

The film’s standout set-piece is without doubt the ferocious storm which accompanies Ponyo on her return to land. Watching the little girl run atop the crashing waves composed of schools of giant fish is as breathtaking as it is iconic. There is a beauty in the painstakingly hand drawn anime imagery Miyazaki employs which would have been lost had the scene been swamped in layers of soulless, faultless CGI. Such intimate attention to homely detail is paid throughout the film that you become as invested in watching the famished kids scoff down noodles and ham as you are in watching Ponyo magically enlarge a toy boat into a feasible vehicle for her and Sōsuke to traverse the flooded village in search of the young lad’s mother (Tina Fey). Ponyo’s destination may never be in doubt, but this journey under the sea and into your heart is more than worth taking. Set sail for superior animated filmmaking!


CR@B Verdict: Hayao Miyazaki’s enchanting reimagining of The Little Mermaid is a dazzling and graceful ode to innocence which is sure to delight and uplift all ages. Ponyo is a must sea.
****.5
Created by ~ CR@B Howard ~ at 12:19