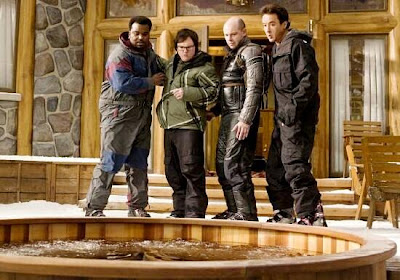 In an extreme example of lazy journalism, it seems that every US comedy with a lead cast of middle-aged men is evermore destined to be compared to commercial goldmine The Hangover. But am I the only person who wasn't overly enamoured with last year's less black, more slapstick take on Very Bad Things, and feel “2010's answer to The Hangover” (as the Hot Tub cover quote boasts) flies waaaaay over the bar set by Todd Phillip's Road Trip for the over 30's?

A far more appropriate comparison – take note, Glamour “critics” – would be to call Hot Tub Time Machine the US answer to the brilliantly underrated Frequently Asked Questions About Time Travel, minus the cosy quality of the intimate pub backdrop and chummy dynamic of the nerdy leads. What d'ya mean that's too wordy for a cover quote?!

But whereas the UK's feature-length sitcom flushed its characters into a baron and apocalyptic future via a lavatory portal, Hot Tub spins in the opposite direction, beginning with its protagonists at an all time low, despairing at their miserable adult lives, before an evening in the titular outdoor jacuzzi hurtles them back to their 80's heyday at a holiday ski lodge brimming with jheri curls, leg warmers and icons of old (Crispin Glover! Chevy Chase!! ALF!!!).

Eshewing a total geek-out, Hot Tub is fully loaded with crude humour (“It looks like Gary Coleman's forearm!”) and gross-out moments (“You drive a BMW, right?”), while the foul language gauge is (unnecessarily) cranked up to code blue throughout. This is, after all, a post-American Pie product, albeit with an 80's flava. 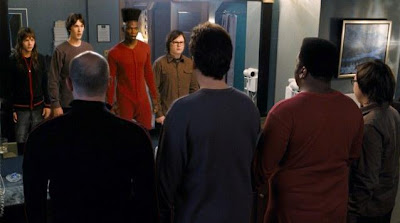 Yet it's hard to be insulted by the laddish banter thrown about by the middle-aged trio of Cusack, Robinson, Corddry and young tag along Clark Kick Ass Duke as Hot Tub's depressed gents come to terms with being wild teenagers all over again (or in Duke's case, not even born) and attempt to retread the exact same steps they took two decades previous – with hilariously disastrous results.

The zealous cast are superb, their every desperate action exuding charm as they attempt to appease the timeline and not erase themselves from existence. “The butterfly effect?” Corddry's loud-mouth Lou questions, “I LOVE that movie!” Any viewers initially deterred by the high concept time travel shennanigans will be won over by the human plight at the film's core, and the fact that only Duke's basement-dwelling role-player Jacob has any real grasp of the technicalities (“I write Stargate SG-1 fan fiction!”).

From Lou's fascination with anticipating when the hapless bellboy (Glover) will lose his arm, to Robinson screaming down the phone to his nine year old future-wife about the evils of adultery, even the most clichéd and farcical genre tropes become laugh-out-loud running jokes which won't confound even the most resolute sci-fi hater.

The writers know Hot Tub Time Machine is by no means the first comedy to genre hop; it's out-there, sure, but they aren't reinventing the wheel here. Yet they are having a blast sending up the classics (Back To The Future!) and wallowing in retro heaven while the amiable characters rediscover friendship, fun and how to take a fork in the eye for a second

time. And that's what comedy is all about, right?

Finally – and this deserves a paragraph all of its own – Craig Robinson's singer-turned-under-the-thumb-husband Nick getting up on a stage at Winterfest '86 and regaining his youthful groove by giving the awestruck audience a twenty year preview of The Black Eyed Peas' “Let's Get It Started” is a stand out scene I simply cannot watch without cracking an almighty grin. Don't believe me? Do a search for the clip on Lougle.


In a CR@B Shell: Anyone dissuaded by the bonkers expository title really should learn to jump in and relax, as Hot Tub Time Machine is an endearing tale of lost friendship salvaged by time (travel), humorously dressed up in a laugh-out-loud sci-fi concept and neon leg warmers.
aaaaa
Created by ~ CR@B Howard ~ at 14:23