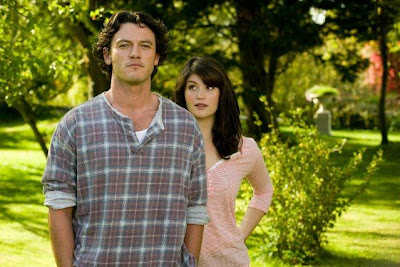 [SPOILERS] I was utterly beguiled by the bright and frolicsome trailer for Stephen The Queen Frears’s film adaptation of Posy Simmonds’s country-set graphic novel. I wasn’t previously aware of the comic strip adventures of Tamara Drewe, but the theatrical trailer made it look like a light-hearted and wry dig at the rural middle classes. Plenty of teasing pokes at animal-mad, shotgun-carrying farmers who have no idea what a Prius is, then, I thought.

Bridget Jones in the country and The Archers with added sauce were two critical comparisons which filled me with hope for this British romantic comedy. Many-a-glowing 4 star review didn’t hurt, either, nor did the chance to see cutie Gemma Arteton squeeze into those denim hotpants… ahem.

Oh boy was I mistaken. No, not about the hotpants; indeed I cannot fault Ms. Arteton’s spunky performance as the eponymous music journalist who returns to her childhood homestead to prep the property for sale, ruffling many a local feather in the process. Alas, all of my other – more highbrow – expectations for Tamara Drewe were quickly quashed under a stampede of petrified cattle.

Firstly, I found it to be a thoroughly shallow film. Miss Drewe returns to idyllic rural Devon with a new nose. No, not a new nose, she points out, but a hulk of cartilage lighter nevertheless. A spattering of torid split-screen flashbacks reveal her once humungous honk – to little comedic effect – while all the men go wobbly at the knee for the grown-up city fittie. 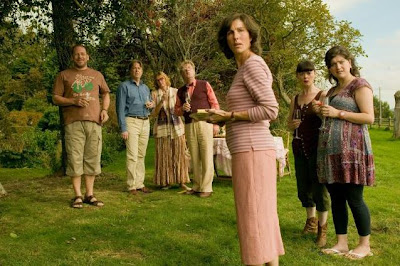 Despite this universal admiration, Tamara swiftly finds herself in a futile engagement to indie drummer Ben Sergeant (Dominic Cooper), a hideously egotistical and offensive tosser with a short fuse who is anything but the marrying kind – but, hey, who cares about all that personality bollocks when he’s a big star?!

Secondly, the film was let down by a raft – nay, an ocean-liner – of horrifically unpleasant characters. Everyone is either a morally bankrupt bed-hopper, a foul-mouthed, uncouth twat or a spineless wimp. Crime novelist Nicolas Hardiment (Roger Allum) is continually cheating on his loyal housewife, Beth (Tamsin Greig), for no good reason except “because you let me”, then expects instant forgiveness from his weak-willed spouse, who all too often accepts...

Yep, even the “good” guys we’re meant to identify with are flecked with flaws here. Take genuine farm-boy and Tamara’s former fling, Alan Cobb (Luke Evans): he secretly still fancies her, but is so crippled by self-deprecation that he sulks in the background moaning about how hard to has to work, “making do” by using the local barmaid (Josie Taylor) to fill his wellington boots, then instantly forgets sluttish Tamara’s rampant indiscretions the second she cries on his shoulder! This is meant to be romantic?!!

all in the name of obsession – while even tame Thomas Hardy analyst Glen McCreavy (Bill Camp), staying at the Hardiment’s writer’s retreat, scuppers any chance of audience sympathy when he scarpers the minute the shit hits the fan in a wholly disagreeable and bloody cow-pat of a climax.

For all its “ironic” and “satiric” intent, I found the storyline to be far too dark and, quite frankly, depressing to be enjoyable: twee Devonshire landscapes - and Gemma Arteton - aside, Tamara Drewe doesn’t paint a very attractive picture of the English countryside - or its untrustworthy dwellers - at all.


In a CR@B Shell: Shedding its quaint country charm for a deluge of sinister, shallow and sleazy shenanigans, Tamara Drewe is an undignified crime of a “romantic comedy” which left my nose out of joint.
aaaaa
Created by ~ CR@B Howard ~ at 09:56