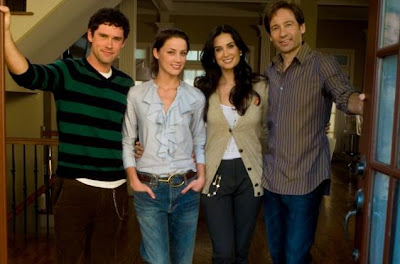 [SPOILERS] Perfect house, perfect car, perfect gadgets, perfect kids... perfect lives? The Joneses may be the new family in suburbia, but the neighbourhood is already green with envy and struggling to keep up with these ultimate trend setters. Little do they know that this perfect middle-upper class “family” is actually a team of stealth marketers out to sell their manufactured way of life.

If you haven’t yet seen the film and you’re angry with yourself for reading far enough into my review to ruin the twist, then don’t worry; even the film’s tagline gives the game away, somewhat diminishing the shock value of seeing promiscuous high schooler Jenn Jones (Amber Heard) strip naked and get into bed with her “father”, Steve (David Duchovny), twenty minutes in.

I’m sure there are film fans out there who will buy in to The Joneses ironic and satirical nature; the gorgeous yuppies, shiny top end products and sunny suburbs masking the dark stab at consumerist society which underlies this noughties social commentary. Unfortunately, it just didn’t click with me. It felt like the film didn’t really know what it was trying to be, so held back from being too satirical, too dark, too funny, too dramatic or too clever to confidently sell itself.

It probably doesn’t help that Steve – a former golf pro and car salesman who is new to this unusual line of work – is such a genial and moral lead character that he even wins over his clinically austere “wife” and long-term businesswoman Kate (Demi Moore). You simply cannot hate a man who - no matter how much shit his dysfunctional family unit get into - you always know will do the honourable thing.

out of sync with the more lightweight bulk of the narrative, leading to a very patchy whole.

I guess this is why The Joneses – for all its gallant intentions – was gathering dust on the studio’s shelf for so long after it was filmed; the marketing bods were probably as bewildered as I was by how to sell this genre-clash concoction and didn’t want to sink too much capital into a gamble. Which is somewhat ironic given the film’s none-too-subtle assertion that it’s easy to sell anything to the gullible and jealous masses.


In a CR@B Shell: By no means a generic run-of-the-mill comedy, The Joneses is a daring fable of our materialist time. Alas, it stops just shy of delivering on its barbed concept’s promises, and I failed to invest in this uneven product.
aaaaa
Created by ~ CR@B Howard ~ at 10:01