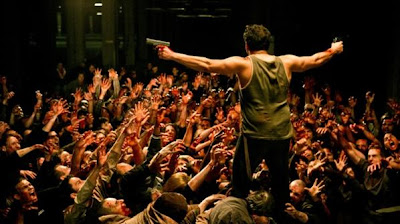 Whenever a blockbuster blows up at the box office you can guarantee that a cascade of shlocky copycat releases with unashamedly similar covers will bombard supermarket DVD shelves to make a quick buck off of a certified brand name: Paranormal Activity had Paranormal Ascendancy (they even changed the title from 3AM), Avatar had child-friendly Battle For Terra and Sherlock Holmes had... Sherlock Holmes (though you'd be hard-pressed to muddle the two given how Sherlock vs. Monsters – as it is known in the US – has a friggin' T-Rex photoshopped across the cover!!).

You would be forgiven for thinking that French tower block zombie flick The Horde was a similarly public-duping rip off of Spanish tower block zombie flick [REC] and its recent sequel (indeed the pair debuted on UK DVD in the same week – way to go, Momentum!). You would be forgiven, but you would be wrong. Locale aside, whereas [REC] is a terrifying, claustrophobic first-person nightmare, The Horde is a more blatantly ballsy testosterone-fuelled gore-fest. Think 28 Days Later meets From Dusk Til Dawn.

The Horde's premise is so simple and the details so sketchy, it's clear that all plot points are just an excuse to have a madcap smackdown between cops, gangsters and zombies – and there's nothing wrong with that when the carnage is as wickedly fun and unreserved as it is here. We never do find out why the dead are coming back to live for a fleshy nibble, but it is a winningly vicious depiction nonetheless: the feral former-corpses are more like possessed coke-heads than shuffling meat piles. 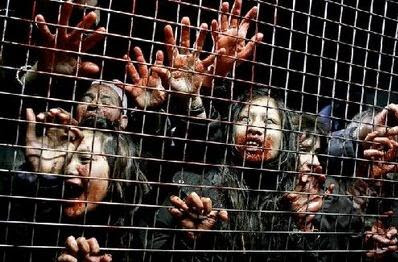 As the ever-massing horde ravage the duelling human teams down to three-a-piece, the diverse survivors (cautiously) join forces to battle their way down the stairwell to ground level, slaughtering – and in one uncomfortable scene, torturing – as they go. With no-one willing to trust anyone else, the group dynamic is constantly shifting, until you realise that all but two of the characters are unsympathetic, backstabbing arseholes.

A word of warning: the police do not look or act at all like figures of authority, which does initially confuse. Their tower block siege is entirely motivated by revenge for a fallen comrade, while their “plan” of creeping in via the building's back-door wearing balaclavas and armed with guns seems unforgivably amateurish. Even the gang cannot believe how foolish the unit are for having no back-up. Were it not for their badges, I would have had a very hard time believe this “crack unit of elite officers” were anything other than rival terrorists.

Furthermore, latecomer Réne (Yves Pignot) – a racist, old-school resident with an axe in his hand and a sadistic twinkle in his eye – initially injects some humour into the film with his charismatic outbursts and in-your-face attitude, but he quickly irritates and his animated, over the top acting reminded me of the sort of stereotypical character you would find in a Studio Ghibli film.

But enough with the downside, because all of this is forgiven the minute the claret starts spraying, the limbs start flying and the action kicks in. This is where The Horde flourishes. Speaking of kicking, acclaim must go to Alain Figlarz, the film's choreographer, for some stunningly spirited combat sequences (for zombies that run can also fight back), even if the editor with the penchant for replaying the knockout blows from various angles and at various speeds really should be demoted to Steven Seagel vehicles forthwith...


In a CR@B Shell: A blistering and brutal bloodbath of bullets, bodies, biters and ballsy bad-asses: The Horde is a riotous and unsympathetic feast for hardcore horror hounds who demand nothing but carnage.
aaaaa
Created by ~ CR@B Howard ~ at 12:49