Sly and the Family Stocky 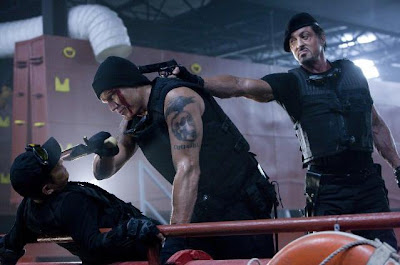 In a balls-out, idol-starring, action beat ‘em up extravaganza up like The Expendables, does anybody really give two hoots about the plot? You know, the talky bits in-between the blood letting, bone crushing, car chasing and cameo spotting. No? Thought not. Okay, well I’ll make this as quick as I can then:

The film is named after a team of tough guy mercenaries, lead by Barney Ross (Stallone), who all have skills in different types of combat: martial arts (Li), blades (Statham), weapons (Crews), bombs (Couture) and sniper rifles (Lundgren). The Expendables are hired by the enigmatic “ Mr Church ” (Willis) to overthrow a dictator (Zayas) on the fictional Mexican island of Vilena .

Much fighting, exploding and rescuing ensues as the team realise “Mr Church” isn’t who they believed him to be, and Vilena is actually under the control of ex-CIA agent James Munroe (Roberts), who has recruited Lundgren’s aggrieved ex-Expendable, Jensen, to work alongside his henchmen Paine (Austin) and The Brit (Daniels) and take the dictator’s daughter (Itié) hostage.

If that lost you then you need to go back to school – but fear not: you’ll still be cheering at the frantic action, sniggering at the team’s torrent of spiky banter (“It’s not easy being green,” “He wants to be President,” “That’s a statement,” “Warning shot!”) and dribbling with sadistic glee as digital blood splatters the walls, the body count rises exponentially and planes destroy harbours in floods of flames. Forget narrative logic, this is one visceral and testosterone pumped thrill ride – and that’s what people came for, right? That, and Schwarzenegger’s sixty scene-stealing seconds.

In a film not exactly celebrated for its acting talent (muscles and star power are definitely the bigger draw), comeback king Mickey Rourke – under an ultraviolet lamp with the camera zoomed in close to his quivering lips and tear-drenched eyes – delivers an astonishingly heart wrenching monologue as former teammate Tool, about turning his back on a woman’s suicide in Bosnia. The scene is unlike anything else in The Expendables, and it adds a glimmer of substance to the shallow OTT spectacle. 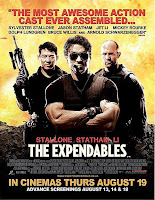 Not that there’s anything wrong with shallow OTT spectacle; the film truly explodes to life the minute a punch is thrown, a shabbily CGI-ed fire is ignited or a bullet is shot, but it is in the quieter moments (Rourke’s monologue aside) that the film looses its edge and you just wait for it all to kick off again.

Regrettably, even with their alleged “specialities” the characters are all very much of a muchness and if they weren’t all über famous action stars, you’d have trouble telling muscle from muscle. You may even say they're all *whisper it* expendable...


CR@B Verdict: Booms, bangs, blades, bullets, brawls, banter, blood, baaaaad CGI, a bevy of bad-ass action stars and a definite whiff of brie – The Expendables is the ultimate “B” movie. It won’t be to everybody’s taste, but if you go in expecting nothing more accomplished, you won’t be disappointed.
aaaaa
Created by ~ CR@B Howard ~ at 10:09