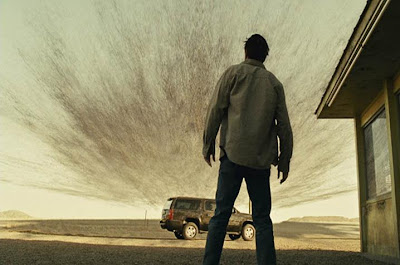 God has lost faith in humanity. Again. But whereas the last time he summoned a flood to wash over the land, this time he has charged his legion of Angels with the task of possessing the weak-minded to wipe out those who put up a fight. Only one – Archangel Michael (Paul Bettany) – dares defy the Lord's word, and he is expelled from Heaven and dropped to Earth.

He lands in Los Angeles (where else?), where our protagonist cuts the wings from his own back and raids a Korean gun factory for an arsenal of automatic weaponry. Apprehending a police car, Michael heads to the aptly named Paradise Falls, an out of the way diner cut off from civilisation in the Mojave Desert, to ward off the Apocalypse and save humanity by overseeing the impending birth of mankind's saviour... All in a day's work.

It's a sumptuously mouth-watering cinematic prospect: God's supernatural minions shedding their angelic façades to face off against a pocket of human resistance. Imagine the fun directors could have with that unholy battle to end all battles? Alas, a prospect it remains, as it seems the creative force behind Legion's cameras had far too much fun with the CGI-crammed face-off sequences, that they forgot to string them together with a logical or enrapturing narrative. 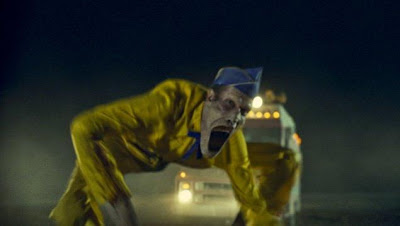 Watching an ice cream vendor (Doug “Abe Sapien” Jones) roll up to the diner in his jingle tooting van before his limbs elongate freakishly and he lumbers spider-like towards the holed-up patrons, or a kindly OAP (Jeanette Miller) sprout animal fangs and crawl on the ceiling taking chunks out of people's necks is all thrilling stuff (the granny scene in particular is a real hoot, although that may be because it was the first), but a good movie individual set-pieces do not make.

Particularly not when the plot doesn't make a lick of sense (why do the Angels even need to possess people rather than just attack themselves? Why did God let things end the way they did?) and the ever-diminishing band of human characters do little to evoke our sympathy. Everyone has a mountain of issues and all they seem to do is argue. There's the diner owner Bob Hanson (Dennis Quaid), his naïve-but-loving son Jeep (Lucas Black), the hook-handed, bible-loving cook Percy (Charles S. Dutton) and the everywoman waitress, Charlie (Adrianne Palicki), who is pregnant with the second coming (although the writers don't have the balls to say so outright).

They are joined in the desert by frustrated family the Anderson's – Howard (Jon Tenney), Sandra (Kate Walsh) and their rebellious teenage daughter Audrey (Willa The O.C. Holland) – and single dad Kyle (Tyrese Gibson). The film rambles from eye-popping set-piece to set-piece, killing off the braindead cast in all manner of madcap ways, and there is such an almighty gap between the prologue which introduces Michael and the fallen Angel's appearance at the diner that you've almost forgotten what the point of any of it is and you're just gorging on the spectacle.

By the time Angel Gabriel (Kevin Durand) belatedly turns up to kill Charlie's baby (yep, she gives birth) and finish the job Michael refused, the film is beyond redemption and all logic has been thrown out the window of a speeding truck. The possessed hordes, it transpires, cannot actually harm the baby, allowing Jeep, Charlie, her child and Audrey to walk straight through them and drive away, while the poor new born is able to survive being dropped and a high-speed car crash without suffering a single boo-boo!!

You know what they say, God: if you want a job done properly... don't hire Peter Schink and Scott Stewart.


In a CR@B Shell: Legion's intriguing premise is crucified for the sake of a handful of absurdly wacky independent set pieces, hung together by an incomprehensibly weak narrative delivered through vacuous characters. All in all a doomsday disappointment.
aaaaa
Created by ~ CR@B Howard ~ at 03:52