The Empire Strides Back 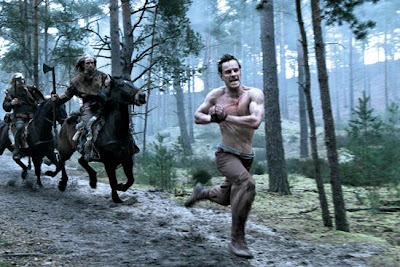 Following the stellar double whammy of Dog Soldiers (2002) and The Descent (2005) – not to mention a near messianic level of admiration from Total Film magazine – it is a surprise to me that writer and director Neil Marshall’s subsequent releases (2008’s Doomsday and this year's Centurion) have been released to little fanfare. Indeed, Centurion’s cinema release must have been so limited it totally passed me by!

Sticking with his trusted blueprint of pitting an ever-diminishing band of heroes against a much larger and seemingly unconquerable enemy, Marshall here swaps the supernatural for the quasi-historical – although we’re still very much in his comfort zone of Scotland (Marshall’s beloved homeland and locale for all his previous films), even if it is known as Caledonia back in 117 AD.

Turning the tables on our expectations and favouring the invaders of the sword-slashing, armour-donning Roman Empire over the native, spear-throwing, warpaint-wearing Celtic Picts, Marshall mines the ambiguous legend of the ill-fated Ninth Legion (which was the film’s working title) for gritty, battle-heavy action/thriller gold. 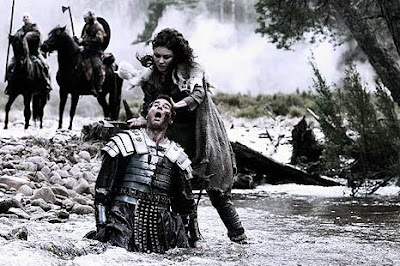 According to historians (and lazy researcher’s best friend, Wikipedia), the 4,000 strong Roman legion marched into Scotland and just disappeared, never to be heard from again... Marshall creatively surmises that the military failure was wiped from the history books to keep the Roman governor of Britannia's record untainted, after a Pict sect lead by a mute, vengance-fuelled warrior (Olga Quantum of Solace Kurylenko) slayed the invading army for murdering their chief's (Ulrich The World Is Not Enough Thomsen) young son (Ryan Atkinson). Lovely chaps.

Yet here we are, siding with the pillaging Roman's, whose motley crew of seven Everyman survivors – lead by centurion Quintus Dias (Michael Hunger Fassbender) – first march north to rescue their captured commander (Dominic 300 West) from the Pict settlement, then head south (via the west, naturally: tactics, people!) to the supposed safety of their fortified garrison. It's a simple plot unburdened by too much character detail.

What Centurion does offer a lot of, however, is walking. Even when the two forces aren't walking towards one another, they're chasing after one another, weapons in hand and revenge in their eyes. And when the chase is up, they're fighting one another. Relentlessly. You see, Centurion also offers a grandiose amount of fighting, and Marshall doesn't skimp on the more spectacularly savage money shots. Many a head is separated from body, eye gouged out and limb hacked off – and we see every bloody strike and slash.

Away from the blistering action, the film’s washed out blue-grey palette, coupled with its misty woodland-shrouded landscapes and swooping aerial views of the Scottish Highlands, lend Centurion an epic and atmospheric quality similar to the obviously comparable Gladiator (2000). Although Neil Marshall's brisk and slimline 93 minute sprint will not remain as iconic as Ridley Scott's drawn out marathon, Centurion does deliver exactly what you would expect from a genre piece carrying the tagline "Fight or Die".


CR@B Verdict: Grisly, grimy and with gallons of gore, Centurion may not be perfect but what it lacks in brains it more than makes up for in brawn: Neil Marshall’s latest is a straight-up slice of hardcore popcorn entertainment.
aaaaa
Created by ~ CR@B Howard ~ at 17:14