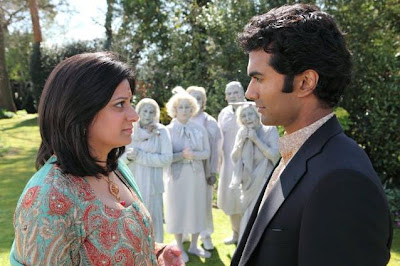 Dumped by her fiancé six months ago, downtrodden Roopi Sethi (Goldy Notay) has let herself go: lacking in confidence and comfort eating to fill the void left in her life, much to the distress of her meddling, matrimony-mad mother (Shabana Azmi).

Mortified by the unsympathetic rejections her daughter receives, the widowed Mrs Sethi takes her marriage obsession to a preposterous extreme by killing off the shallow parents of her daughter’s potential suitors in all manner of Indian food related ways (suffocated by naan bread, fed curry until their stomach explodes, stabbed by kebab skewer, you get the gist).

I can thoroughly comprehend why director Gurinder Bend It Like Beckham Chadha’s latest Ealing-set cultural comedy was slaughtered by critics; watching the spirits of Mrs Sethi’s victims return to help the exasperated (and totally implausible) serial killer find love for her daughter is an abysmally wretched premise.

Futhermore, the barmy plot is totally predictable – the minute old family friend turned Detective Inspector, Raj “Googly” Murthy (Sendhil Heroes Ramamurthy), is tasked with going undercover as Roopi’s boyfriend to determine a motive for the crime the police believe she is guilty of, you just know it will lead to nuptials – and I have a real problem with the off-kilter morals of a film which so easily forgives a murderer.*

That being said, It’s a Wonderful Afterlife – from the pun in the title to a Carrie-riffing psychic hullabaloo at a wedding reception – obviously knows it is over-the-top pap, and it plays up to it with unrepentant verve. The ghostly make up looks ridiculously theatrical, t

he Asian influence brings a deluge of music and colour, and the star speckled cast – particularly Steve “T4” Jones cameoing as a newsreporter and Sally Hawkins as kooky spiritualist Linda – camp it up and play for laughs.

The film’s nauseating lack of refinement definitely won’t be to everyone’s taste, but how can you take a film seriously where Zoë Wanamaker chokes on a cake laced with rat poison and Mark Addy gets a pair of secateurs in the groin?