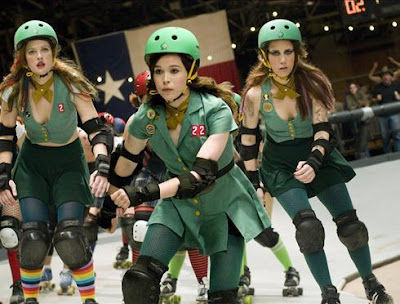 Exasperated by the humdrum banality of backwater life in Bodeen, Texas, 17 year-old Bliss Cavendar (Ellen Page) and her best friend Pash (Alia Shawkat) dream of escaping to more exciting climes. But whereas Pash has the prospect of attending an Ivy League school to look forward to, Bliss still has to find the flint to ignite her passion.

That flint, it transpires, is Roller Derby, the adrenaline-pumping contact sport on skates where teams of women battle it out to speed around the track and overtake the opposing squad. Lying about her age, Bliss signs up for the perennially pummelled Hurl Scouts and soon becomes a poster girl for the Austin outfit.

But what will her straight-laced, pageant-obsessed mother (Marcia Gay Harden) make of this dangerous and rebellious new hobby, and how long will Bliss be able to keep her real age from her amiable but underperforming teammates, especially with bitchy rival Iron Mavon (Juliette Lewis) on to her deception?

Yeah, I know, on paper Shauna Cross’s screen adaptation of her own novel sounds awfully familiar, doesn’t it? A team of losers welcome in a new team member who transforms the underdogs into super pups, only for personal issues to throw a spanner in the works and leave the star player out of action for the upcoming Championship final, yada, yada, yada, yawn. 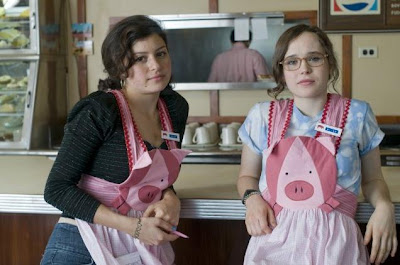 But – and this is a mammoth, obese but – trust me when I say Whip It truly bursts to life on screen: the characterisation is charismatic, the dialogue is witty and razor sharp (“You guys came in second out of two teams! Yeah, let’s celebrate mediocrity!!”) and every scene is crackling with an inspirational vibe which hides any hint of mawkishness under a crash helmet, knee pads and an abundance of attitude.

Maggie Mayhew, Bloody Holly, Rosa Sparks, Jabba the Slut, Eva Destruction, Smashley Simpson – these roller derby chicks are tough, but they’ve also got a quirky sense of humour and it’s hard not to crack a smile at their vibrant, culture-riffing pseudonyms and garishly OTT uniforms. It is no wonder that Bliss found this alternative world to be a thrilling release from her clueless father (Daniel Home Alone Stern) and pushy mother, and her coming of age in and out of skates is a joy to watch.

You wouldn’t be laughed off the circuit for thinking Drew Barrymore’s surprisingly proficient directorial debut was set during the 1980’s. From the frankly primeval beauty pageants Bliss is forced into entering, to the Styker t-shirt she wears while dating local rocker Oliver (Landon Pigg), the pinball machine they play in the local arcade and the vinyl record collections they peruse, Whip It is filled with many a charming and quaint eccentricity which underlies Bodeen’s evolution vacuum.

And yet this is concurrently such a thoroughly modern roller-motion picture, channelling such timeless themes as empowerment, independence and fighting for what you believe in with such a funky sense of unconventional cool that it is hard not to admire Bliss’s giant V-sign to tradition.

The confident-yet-cute Ellen Page once again scores with a winning performance as the girl who will become Babe Ruthless, but the entire ensemble cast are likewise superb at conveying their characters with such genuine conviction that they really jump out of the screen. Watching Bliss and Pash mockingly dance along to the radio while changing the lyrics to Dolly Parton’s “Jolene” is a personal highlight, if only because it is the kind of nutty, carefree thing I can remember doing at that age. And this morning… *cough*


In a CR@B Shell: Shauna’s snappy script and a splendid squad promote Whip It from sports movie mediocrity to genre frontrunner. A sweet, colourful and accomplished directorial debut from Drew, I challenge you not to fall in love with this charming and spirited indie flick.
aaaaa
Created by ~ CR@B Howard ~ at 09:57