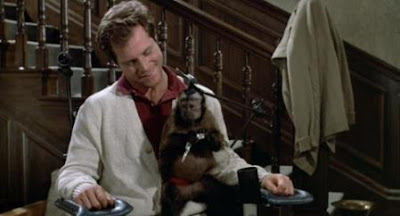 Despite being George A. Romero's first studio release and basking in the twilight of 1985's Day of the Dead, it's still not hard to see why Monkey Shines is one of the horror legend's lesser known works. For starters, the high concept premise – for all its good intentions of delivering an anti-animal experimentation message – sounds utterly ape-shit crazy, if you'll excuse the simian schtick.

Paralysed from the neck down following a car accident, Allan Mann (Jason Beghe) becomes a bitter and enraged young man. His frustration is anything but quelled when his “clinical c*nt” (classic line) of a girlfriend (Janine Turner) leaves him for his surgeon (Stanley Tucci) in his time of need, and his house nurse (Christine “Mrs Romero” Forrest) is an incompetent, unsympathetic bitch.

Allan is given reason to smile again, however, when his Mother Nature-tampering scientist of a best mate, Geoffrey Fisher (Jon Pankow) donates his smartest simian subject, Ella (Boo), to be Allan's legs and hands. That's right folks, Ella is trained to be Allan's slave, obeying his every order and request.

However, Geoff fails to mention to his wheelchair bound pal that Ella has been receiving regular injections of human brain matter in his laboratory, and soon the genetically modified junkie monkey starts developing a bizarre jealous streak, anticipating Allan's every need and even carrying out his most depraved subconscious wishes...

See what I mean? On paper (and computer screen), Monkey Shines sounds like a risible sub-Stephen King horror spoof. I'm still struggling to work out exactly how being injected with a dead girl's brain tissue can give Ella a psychic connection to Allan, but it's to Romero's credit that this novel adaptation – for all it's cheesy charm and gimmicky gubbins – still works as a psychological horror.

Allan's helplessness lends the film a great layer of tension, and Ella's psychotic splurges deliver the gore (although you will be disappointed if you are expecting blood and guts on a zombie chomping scale; this is more of a thriller). I particularly liked the close up shots of Allan with elongated canines, which gave a perverse and supernatural slant to this (pseudo-)scientific satire, though I won't comment on the scene where Ella licks blood from his lips, and what that may say about Allan's primal urges...


In a CR@B Shell: It isn't clinically perfect – or hide-behind-your-hands horrific – but Monkey Shines does well to make a sophisticated and creepy supernatural thriller out of a bananas concept. Bravo to Romero for taking a risk with an unconventional caper which most people would throw faeces at before giving a chance.
aaaaa
Created by ~ CR@B Howard ~ at 01:01