A Right Pair of Peacocks 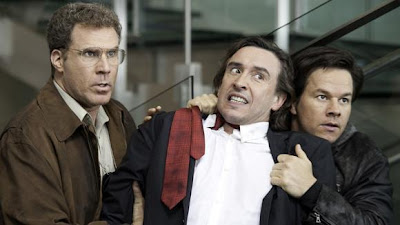 [SPOILERS] Five minutes into this buddy-cop genre spoof and Samuel L. Jackson and Dwayne “The Rock” Johnson have just smashed their Chevy through the side of a double decker bus during a routine drugs bust. Guns are blazin’, hoods are poppin’ and tyres are screechin’; it’s hyperbolic mayhem and the A-listers are overacting their asses off, but it’s funny stuff, particularly when Jackson wisecracks the line: “Did anyone call 9-1-Holy-Shit?!” I went into the cinema with zero expectations, but after this full throttle opening, my hopes were propelled.

Big mistake, for this was The Other Guy’s comedic zenith and very soon it fell flat on its face on a concrete sidewalk. As the film’s title implies, this film doesn’t focus on the shoot-first-ask-questions-later celebri-cops who make the front pages and win the hearts of the community, no matter the carnage. This film is all about the little guys, the pencil-pushers, the office bods who get nada recognition for the stacks of paperwork they fill out behind the scenes.

Enter Detective’s Allen Gamble (Will Ferrell) and Terry Hoitz (Marc Walhberg). They will be your, ahem, “entertainment” for the following 100-odd-minutes, although they will never come close to matching the brilliance of the warm-up act. Yes, sure, I understand that this is the point – Gamble is a naïve, play-it-save cop who idolises the big boys but not enough to follow in their footsteps; Hoitz is frustrated by the lack of action he gets after being demoted following a firing incident – but I also expect some laughs from a comedy.

I’m not over exaggerating – indeed I may be being slightly generous – when I say I cracked a lowly trio of smiles once Gamble and Hoitz took centre stage. I’ve never been a huge fan of Will Ferrell’s confused adolescent style of comedy (half the time he just says unfunny things in an elevated and pathetic voice), but even I was expecting more from his fourth collaboration with director Adam Anchorman McKay.

My prevailing issue with The Other Guys is the repetitive nature of the humour. Gamble isn’t cool, he certainly isn’t a looker, yet somehow he gets all the hottest women and fails to recognise just how lucky he is to have landed a wife as smoking as “plain” Eva Mendes – but this point is drilled into us so often that you can almost anticipate when it will be recycled next.

The same is true of Hoitz’s flawed analogy of him being a peacock who wants to fly and their Captain’s (Michael Keaton) innumerable coincidental references to TLC songs. In moderation they would have been a hoot, but after a while they begin to bore and I spent most of the film deadpan and counting the wrinkles on Michael Keaton’s face (good god hasn’t he aged?!).

The plot is barely worth talking about, such is its predictability. In fairness writers Henchy and McKay did attempt to spruce up the age-old underdogs-uncover-major-corruption-but-nobody-believes-them-until-it’s-nearly-too-late shebang with the twist that multi-billionaire David Erschon’s (Steeve Coogan; underused) lottery scam is actually being taken out of the NYPD’s retirement fund, but this merely convolutes the light-hearted tone with no comedic reward.

In a CR@B Shell: After a hectic and hilarious opening, The Other Guys slows to the beat of a very different film. Ferrell’s regular routine wears thin and Wahlberg’s shouty straight man irritates in this buddy-flop yawn-fest.
aaaaa
Created by ~ CR@B Howard ~ at 09:37