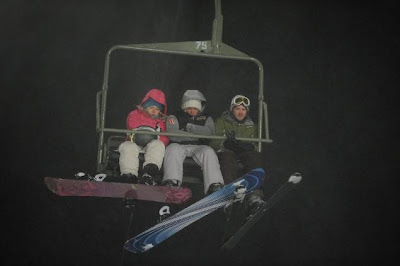 Three friends. Five nights. Forty feet in the air. Temperatures dropping below zero. One chairlift. No way out. This is the terrifying situation which college-goers Parker O’Neil ( Bell ), Joe Lynch (Ashmore) and Dan Walker (Zegers) find themselves in when a series of miscommunications lead the staff at Mount Holliston ski resort to close down for the week in director Adam Hatchet Green’s ultimate endurance test.

What starts out as irritation at the “malfunctioning” ski lift quickly snowballs into panic and desperation as the lights go out and realisation dawns that nobody knows they are still up there. What do you do: Wait for help? Scream until you’re hoarse? Climb? Jump? Freeze to death?! All of these scenarios present themselves to the fraught and freezing trio as day turns to night, frostbite sets in, wild wolves circle below and tensions rise as all hope of rescue fades. 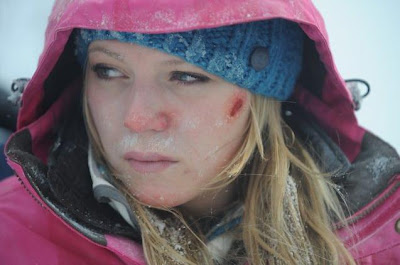 Although Frozen is designated a horror film, and horrible things do happen in it, I deem it would be better described as a tragic character piece. Relating to the livelihoods of the three main players and associating with their pain as their situation worsens is paramount to enjoying this film (if indeed “enjoying” is the appropriate word for such a gloomy and disheartening tale); their nuances and personalities are well

portrayed by the little known actors and they feel like real people in a really horrendous predicament.

The wolves, too, are real wolves, not CGI beasties. Their movements are natural and their behaviour believable, which makes their actions all the more gruesome. Furthermore, the small scale and minimalist feel of the film, as well as the less glossy finish to this low-budget effort, all accumulate to its advantage: this isn’t a cheesy and implausibly farfetched shocker, this could happen to you!


In a CR@B Shell: A tense and distressing rough-edged chiller with three remarkably authentic lead performances which will have you Frozen to the edge of your seat – just don’t fall off, whatever you do!!
aaaaa
Created by ~ CR@B Howard ~ at 09:47