Return of the Master Race 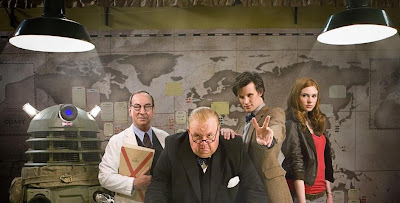 [SPOILER ALERT] Having taken writing honours on his first two episodes at the helm, for episode 5.3 Stephen Moffat handed scribing duty to a man well known both outside and within the Who-niverse. Renowned for his role in surreal black comedy The League of Gentlemen, Mark Gatiss has also penned two other new Who adventures (“The Idiot's Lantern” and “The Unquiet Dead”), as well as starring as the unstable eponymous scientist in “The Lazarus Experiment” in 2007. This time around, Gatiss is charged with his most challenging task to date: finding a viable excuse for bringing back the Doctor's most distinguishable foe for the umpteenth time. That's no mean feat...

Following directly on from the telephone tag at the close of last week's (personally) disappointing space adventure, “Victory of the Daleks” sees the Doctor (Matt Smith) and Amy Pond (Karen Gillan) return to Earth and return in time – to the Second World War! Summoned to the Cabinet War Room by his old chum and PM Winston Churchill (Ian McNeice), the travelling twosome are introduced to the Allied's latest secret weapon in the war against the Nazis: Professor Edwin Bracewell's (Bill Paterson) Iron Sides. But you, I and the Doctor - though, curiously, not Miss Pond - know them better as encased alien foes who-just-won't-stay-dead, the Daleks. 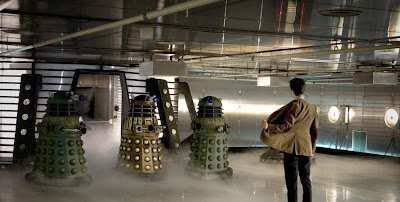 The Doctor is quickly and physically incensed by the Iron Side's refusal to acknowledge their true identities as they mill around the squaddies serving tea to the troops (!), until his testimony triggers a Progenitor Device which unlocks the dying race's DNA and allows them to return to their flying saucer and repopulate the Dalek species (in snazzy multicoloured form), turning on the humans they used as bait to lure the Doctor to unlock the key to their survival. Impressive.

It was a fantastic twist to reveal Prof. Bracewell as a robot created by what he believed where his creations and indebted with a life of false memories, leading to suicidal thoughts – in a pre-watershed family show! Props to Gatiss for an original and credible concept married to an energetic script which sizzled with humour, horror, brains and adventure, without feeling weighed down in any one area. The episode could have fallen flat on so many levels, but it was a roaring success. A standout moment for sheer entertainment value was the Doctor's threat to blow up the Dalek's ship by pushing the TARDIS's self destruct button: “Alright, it's a Jammy Dodger - but I was promised tea!”

The visuals of a blitz-ravaged London were stunning, and the climatic space battle as the Allied spitfires bombarded the Dalek saucer was exciting and vibrant (if a little ridiculous: early 20th century human guns defeating a merciless time-travelling alien enemy?!!). One small worry I am left with concerning future instalments, however, is Amy's role: for the second week running she has been of questionable value to the story until she saves the day with a brilliant last minute solution which even the super-intelligent Doctor hasn't thought up. I like her zesty characterisation and rapport with her childhood idol, but it will become far too predictable if this plot device is employed every week.


CR@B Verdict: A well-balanced and spirited return to form after last week's stumble, and possibly the greatest Dalek story of modern Who. A definite victory for Mark Gatiss: “Ex-cep-tion-al!”
****
Created by ~ CR@B Howard ~ at 06:31