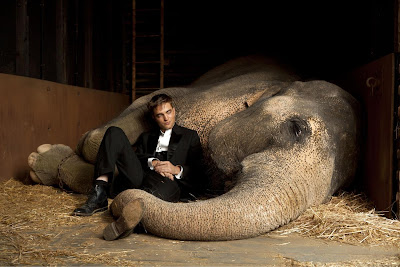 “Life is the most spectacular show on Earth” so advocates the strapline for this Francis Lawrence directed adap of Sarah Gruen’s 2005 historical circus novel. But for all the tight-rope walkers, coochie girls, bearded ladies and animal attractions thrilling audiences beneath the Benzini Brother’s Big Top, Water For Elephants’ main focus is on the shadow which falls behind the spotlight: human’s cruelty to one another in the Great Depression, and their subsequent cruelty to the animals they depend on for income.

Screen heartthrob Robert Pattinson sheds Edward Cullen’s supernatural shimmer for a sweaty brow and browning shirt and hops aboard a moving railcar as penniless orphan Jacob Jankowski, whose Cornell University-educated veterinary expertise saves him from being thrown straight back off by brutal circus master and all-round rotten bastard August Rosenbluth (Waltz), whose travelling troupe is failing to pull in the punters. Until, that is, he acquires a new star act: Rosie the Bull Elephant. 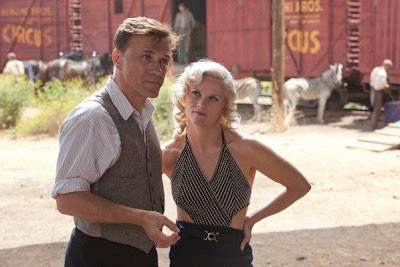 Charging his glamorous wife, Marlena (Witherspoon), with riding the majestic beast and Jacob with training and caring for it, the animal-admiring pair begin to fall in love, with Marlena torn between a man she in equal parts fears and reveres, and her growing feelings for the quietly dignified roustabout with the smouldering eyes who treats her like a lady.

Square-chinned Waltz is distressingly authentic as the volatile August, who will charm you with champagne and a tuxedo one minute then get his thugs to pummel you the next. Pattinson, meanwhile, pulls his own weight commendably outside the Twilight-verse, even if his love affair with Witherspoon is somewhat melodramatic (Their love is doomed! They can’t be together! He’s “beneath” her!).

Much has been made of the films old fashioned vibe, and Water for Elephants is certainly prone to plentiful period piece properties – the misty-eyed framing by a ninety year old Jacob (Hal Holbrook) who recalls his life story to an intent modern day listener (Schneider), the plight of the common man is showcased by roustabout Camel’s (Norton) prohibition-evading drinking problem, whilst August and Marlena live it up in luxury – but for all the “magic” and “spectacle” of the 30’s festivities, what will stick with you long after the circus has packed up and pulled away is the blood, grit and shit-shovelling which made this such a miserable era to live in.


In a CR@B Shell: Team Edward will swoon while animal lovers will squirm as Rosie and her bestial brethren are subjected to tortuous injustices in the name of entertainment. You hear more than you actually see, but nevertheless Water for Elephants better conveys the atrocities of the era than it does an “enchanting” romance.
aaaaa
Created by ~ CR@B Howard ~ at 12:51