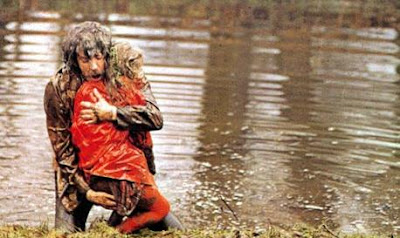 Savaged by grief at the loss of their young daughter (Williams) in a pond accident on their English estate, husband and wife John (Sutherland) and Laura Baxter (Christie) pack their son off to boarding school and up sticks to Venice, a temporary haven for them to clear their heads, soothe their hearts and attempt to reclaim some semblance of a life after tragedy. But while John is working on the restoration of a historic church, Laura is baited by a pair of elderly sisters (Mason, Matania), one of whom claims to be psychic and alleges to have seen the spirit of their deceased daughter...

When I was but a nipper, I can remember switching on the TV late one night and being quite creeped out by the snippet of Nicholas Roeg's seminal meditation on grief which was playing before my innocent eyes. That image of the figure in the red mac has forever stuck with me, much like how some people are plagued by Dracula or Freddie Kruger. However, after catching up with the film as an adult and watching it from start to finish, what struck me most about this psychological horror is how unhorrifying it actually is. And that isn't a derision. 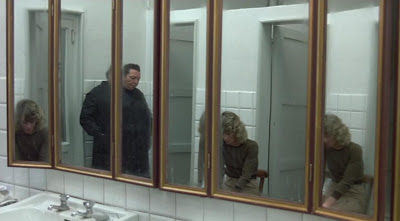 Eerie and disturbing, certainly, but this is no typical cheap-thrills genre flick. Brit director Roeg is skilled at using many artistic and unconventional editing techniques to accumulate an ever-growing feeling of disorientation, pulling the viewer in then losing them amid the labyrinthine Venice boulevards and back streets. It's a much richer and more rewarding sensation to the lazy jump-scares made pedestrian by today's less visionary scaremongers, and it makes that climatic revelation all the more staggeringly unpredictable; the thing of nightmares.

The irony isn't lost on me that a couple wanting to escape the memories of a drowning incident would choose to move to a city which is half-flooded; it's no wonder the pair start to lose their grip on sanity as their vision lingers mournfully on the choppy and unfaithfully reflective water, their belief systems confused by the peculiar sister's comforting/creepy claims and their nerves heightened as a series of murders plague the gondola-strewn waterways. Logic or faith? Superstition or convenience? Acceptance or denial? Alive or dead? Sane or insane? What certainly isn't up for debate is Don't Look Now's status as a quintessential viewing experience for all lovers of the artform.


In a CR@B Shell: A cornucopia of filmic techniques are married together to spellbinding effect in this rich, macabre masterpiece of (dis)illusion, ambience and the fragility of human emotion. Even nearly 40 years on, today's film-makers will still gawp in awe at Roeg's sublime adaptation. Do look now!
aaaaa
Created by ~ CR@B Howard ~ at 15:46