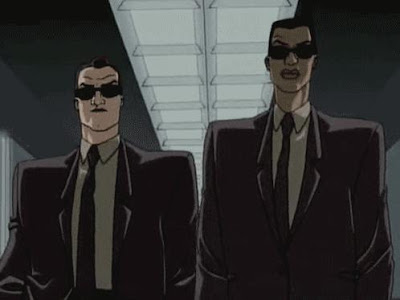 Getting maximum wear out of the last suit they’ll ever don, intergalactic Agents Jay (Keith Diamond) and Kay (Ed O’Ross) return in this animated spin-off of continued undercover adventures to keep the Earth safe from – and ignorant of – the scum of the Universe.

Much like 1997’s other franchise-emanated line-drawn supernatural enforcers, the Extreme Ghostbusters (Volume One reviewed HERE), Men In Black: The Animated Series by-and-large employs a “foe of the week” plot formula which works best when the capers reference or utilize the cache of oddball characters established in the blockbuster films.

For instance, Frank the Pug (Eddie Barth) and Jeebs the limb re-sprouting pawnshop clerk (Tony Shaloub – reprising his role from the films) make a couple of welcome appearances, while the coffee-slurping Worms and mainframe-operating Twins are ever-present in the background at MIB HQ.

Kay is as solemn and tight-lipped about his past as Tommy Lee Jones is on the big screen, while silver tongued rookie Jay is relentlessly optimistic about chipping away his partner’s austerity. Unfortunately, despite its colourful menagerie of alien adversaries, this series suffers from feeling too flat and being too smothered by Kay’s resolute gruffness – Jay is rarely given a chance to shine and any focus on his character is usually to highlight his naïve ineptitude.

This seven episode, single disc collection is simply too short and would have benefited from being packaged alongside Volume Two (available separately) – particularly as Sony have four seasons worth of adventures at their disposal! Nevertheless, a returning character in the form of cricket-legged bounty hunter Buzzard (Sherman Howard) does provide satisfying symmetry between episodes #02 and #07, capping off this slender set nicely.


In a CR@B Shell: The team of writer’s try valiantly to inject Agent Jay with Will Smith’s mischievous overconfidence, but Men In Black: The Animated Series feels too suppressed under Kay’s cloak of misery to come to life. MIB? More like DOA.
aaaaa
Created by ~ CR@B Howard ~ at 12:33