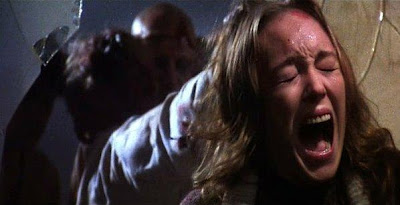 Talk about irony: no sooner had I finished ripping Lucio Fulci's 1980 zombie abomination City of the Living Dead a new (hell) hole (you can read my rant HERE), then LoveFilm whisked me the second film in his unholy trinity as if it were a high priority on my rental list (it wasn't). I wasn't much looking forward to diving back into this kooky director's diverse oeuvre *quite* so soon, but for all its thematic similarities to its predecessor, The Beyond is actually a surprisingly steep step up in all regards.

Heroine of the original, Catriona MacColl, returns again (as she does in part three, The House By The Cemetery, also. Yes, that's on my LoveFilm list too!), albeit in a completely unrelated role. Here she plays Liza Merril, a woman who has inherited a long-deserted hotel in Louisiana, completely oblivious to its unholy history: it was built over one of the seven cursed gateways to Hell. Bummer.

Despite numerous supernatural “accidents” (all involving major blood loss, body disfiguring, eye-piercing, and – on more than one occasion – acid burning) and countless ominous warnings from a shuddersome blind woman (Keller) to keep the hell away from the ghostly guest house, Liza is undeterred in her renovation project – until the dead start to walk the Earth.

Of course, yet again, it's all an elaborate excuse to splash the red stuff and feed the director's ocular fetish in ever-more distastefully sickening scenarios, but the smaller character base and simplified linear plot means events feel more cohesive and purposeful to the journey's end rather than incomprehensible abstract diversions from logic as they did in the hopelessly disjointed City.

A black and white prologue set in 1927 revealing the unlocking of the gateway and subsequent mob crucifixion of the painter responsible is wonderfully artistic in a B-movie pastiche sense, working well as a framing device which is counterbalanced by the protagonist's belated arrival in “The Beyond” at the film's futile but open-ended climax; an epically atmospheric swirling mountainous landscape of dead bodies soundtracked by the shrieks of the eternally tortured. 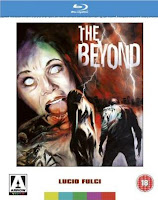 For a film billed as a “zombie horror” it must be noted that the shuffling stiffs don't actually show up en mass until five minutes from the end, but don't let that deter you; there are plenty more unrestrained paranormal atrocities to keep horror nuts happy – including a bonkers scene in which (for reasons completely unclear) a concussed man (Anthony Flees) is attacked by a clutch of tarantulas which proceed to sting his face and bite his flesh! It's a monstrously visionary notion which would have been all the more terrifying if half the arachnids hadn't been laughably puppeteered props! Still, half the fun of these vintage cult oddities is chuckling at the cheese...


In a CR@B Shell: Despite being produced just a year after City, The Beyond feels like the work of a far more experienced director; the script is sharper, the scares more complimentary to the narrative and the ghastly effects more polished (well, except the spiders). I still think he's barmy, but perhaps I was too hasty in writing Fulci off...?
aaaaa
Created by ~ CR@B Howard ~ at 14:01