Tales From the Decrepit 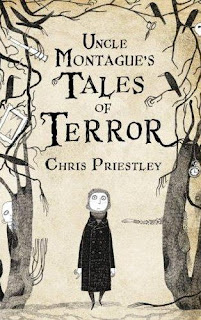 Ostracised by the local children and detached from his cold-hearted parents, little Edgar has taken to visiting his reclusive and eccentric Uncle Montague for company. In his creaky and creepy dilapidated house in the woods, Uncle Montague entertains his young guest with a series of gothic ghost stories, each inspired by the curious artefacts which clutter the man’s living room: a brass telescope, a gilt frame with no picture, a wedding photograph from bygone times, a demon bench end…

Each chapter presents a new chillingly atmospheric story, but after each story is completed, Edgar and his withdrawn uncle’s own story is expanded too. Just where did Uncle Montague get all these bizarre collectables? Why does his butler, Franz, refuse to show his face? Who is it rattling at the windows and running across the upstairs floorboards if Uncle Montague lives alone? Is there any truth to these outlandish tales? All these questions accumulate as the collection continues, climaxing in a final bone-chilling tale of revelation: Uncle Montague’s own.

Some of the yarns are stronger than others – my particular favourites are “The Un-door”, “The Gilt Frame”, “Ghost Story” and “The Demon Bench End”, while “Jinn” and “Offerings” lack definition or intent – but all successfully evoke a macabre ambience and involve child protagonists who invariably meet ghastly ends in wickedly unforeseen twists. If these Tales of Terror are indeed meant for children (they are published by Bloomsbury, after all), the author doesn’t restrain from audaciously shocking deaths and grotesque descriptive passages:

“The features were utterly ruined and looked like something glimpsed in an
abattoir or a nightmare. One side of the face was a hideous mass of gristle and
torn flesh, like a sheep carcass after the rocks have worked it. An unblinking
eye look out from the other side.”

Chris Priestley’s taut but immersive raconteur-befitting prose is complemented by a selection of over-stylised line-drawn illustrations by David Roberts which bring to mind the gothic works of Tim Burton and really help to set the scene: angular tree branches, imposing buildings, never-ending shadows et al. Edgar Allen Poe would undoubtedly approve – and I can only assume Priestley’s protagonist was named as such in homage to the master of the macabre.


In a CR@B Shell: Reader beware you’re in for a scare… Uncle Montague’s Tales of Terror is a remarkable anthology of campfire ghost stories which is delightfully presented and makes for a tense and morbid treat for all ages – just don’t blame me if you get goosebumps!
aaaaa
Created by ~ CR@B Howard ~ at 13:45