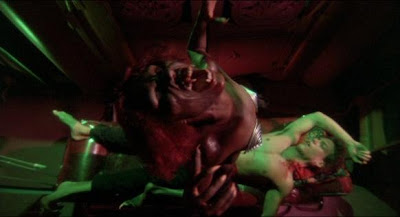 The intimidating Grace Jones portrays a silent-but-deadly Vampire Queen in this cheesy 80s horror/comedy which plays like a prototype model for Tarantino's From Dusk 'Til Dawn. Desperate to prove their worth to the number one fraternity on campus, two cocksure college pledges (Makepeace, Rusler) persuade a wealthy-but-impressionable geek (Watanabe) to lend them his wheels to make a trip to the inner-city to scout out a stripper for the initiation party to end all initiation parties.

As well as making enemies of a gang of albino thugs (!) and nearly getting sawn in half by a “runaway elevator” (seriously), the lads also make the mistake of choosing the only gentleman's establishment in town run by fanged bloodsuckers: The After Dark Club. Preying on the lonely, the drunk and the unloved down-and-outs; you could say they're trading flesh-for-flesh, but Vamp eschews any overt seediness.

Director and co-writer Wenk definitely favours laughter over slaughter, although do not mistake this for an asinine Dracula: Dead and Loving It style spoof. The vampiric make up looks remarkable similar to that later made famous by Joss Whedon's Buffy, and the gory special effects have held up remarkable well over the years. Keep an eye out for the exceptionally explicit exposure to sunlight set-piece. 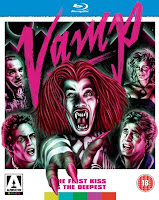 Vamp is a titillating enough post-pub road trip, but it's too bright to be scary (even the sewers are lit in psychedelic shades of purple and neon green which would give Schumacher's Gotham City a run for its money), and the lead characters never feel at all endangered (even when fangs *ahem* don't go their way) because the club owners (Baron, Logan) are too camp to be threatening and everyone seems to take all the supernatural atrocities in their stride.


In a CR@B Shell: Weird Science with added bite; Vamp is a vivid and kooky rite of passage movie which is both influenced by and influences plentiful cinematic perversions of these well-drained creatures of the night.
aaaaa
Created by ~ CR@B Howard ~ at 04:08