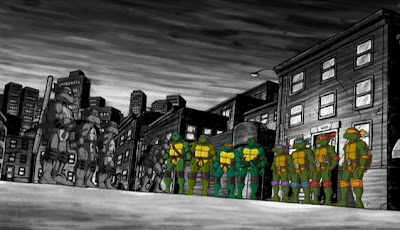 As a child of the eighties with a rose tinted appreciation for everything TMNT (except the appalling CGI big screen reimagining from 2007), this feature length crossover between heroes in a half shell old and new – commissioned in 2009 to celebrate the franchise’s 25th anniversary but delayed until R2 release this year after Nickelodeon acquired the rights – caught my attention as a nostalgic nod to my youth.

Comparable to the fourth-wall breaking “Back to Earth” specials from the Red Dwarf crew (which were received with mixed acclaim two years ago), Turtles Forever sees a dimensional portal transport the fun-loving, pizza-munching party animals from the classic 1988 Mirage Studios cartoon series to the modern day, where the current crop of slick, hardened restylised anamorphic ninja-trained amphibians are keeping NYC safe from criminals human and mutant.

“They’ve got their initials on their belt buckles – they’re like superheroes!”

The production values and attention to detail are incredible, with the animator’s absolutely nailing the juxtaposing styles of illustration and humour. The script is packed full of winks to the audience with the jovial 80’s gang being affectionately ribbed about their unsophisticated technology (the Turtle Blimp is labelled “the lamest vehicle in the history of lame vehicles”) and less than serious nature (“It’s like having five Michelangelo’s!”). 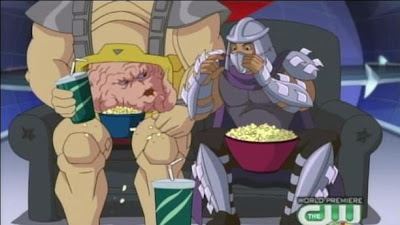 I was howling with laughter all the way through, as the charmless 21st century Turtles continued to be embarrassed by their dimensional doppelgangers (“Can’t you guys be serious about anything?!”) and their less than competent foes in the bumbling old-school Shredder, Krang, Bebop and Rocksteady, who find themselves to be no match for the far fiercer “One true Shredder” from Utrom, who sets about upgrading the clumsy, weak and outdated technology aboard the Technodrome.

“A giant golfball on wheels? That’s your Shredder’s ultimate weapon?!”

It’s a shame that none of the original voice cast returned to their roles, but nevertheless the classic characters are present in spirit – even if the writers do take obvious glee in pointing out the light-hearted show’s flaws (with tongue firmly in cheek, of course), particularly Raphael’s cheesy asides to the camera (“Who are you talking to? There’s nobody there!”) and the elements which didn’t survive the transition to subsequent adaptations (“Oooo, maybe this dimension will have its own Krang?”).

Not content with lambasting just two incarnations of the high-kicking shellbacks, Turtles Forever bravely goes for broke and broadens its targets by having Utrom Shredder discover all the numerous depictions of the heroes (including the live action film trilogy and the forgettable CGI disaster) and realise that the secret to destroying his adversaries is to locate “Turtle Prime” and literally wipe the characters from existence. The third act jump back to where it all began is another painstakingly realised triumph in this radical shell-ebration which fans old and new will admire.


In a Half Shell: Proof that with a little love and affection they CAN make ‘em like they used to, this sublime union of a quarter of a century of TMNT history is the ultimate testament to a timeless and iconic franchise. Turtle Power indeed.
aaaaa
Created by ~ CR@B Howard ~ at 07:13