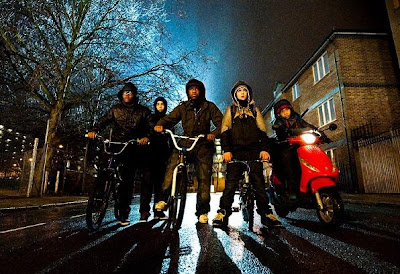 Newport-based rap outfit Goldie Lookin’ Chain must be brap, brap, brapping themselves stupid right about now. If only they had sung: “Guns don’t kill people, giant gorilla alien-things do”, their 2004 spoof megahit would have been an absolute shoe-in for the gangsta rap soundtrack to this genre-blending council estate sci-fi mash-up which. You get me?

Injecting the gritty realism of lower class city life with a triple shot of smugness, humour and blazin' honour, South London ’s concrete jungle plays hosts to a gang war on an intergalactic scale as the subhuman chavvie homeboys of “The Block” take on nonhuman invaders to their patch.

The stereotypes are out in full force as the ASBO delinquents tool up with all manner of switchblades, baseball bats and fireworks to fend off the black-furred, neon-fanged ET’s on this fateful Bonfire Night after gang leader Moses (Boyega) arrogantly decides to kill one of the meteor-carried “tings” in the name of pride. Big mistake, bruv. 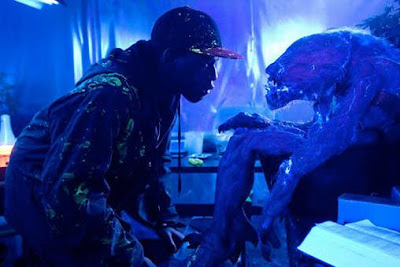 Written and directed by Brit comic and feature film debutant Joe Cornish of Adam and Joe Show renown, Attack the Block is a meteor storm of culture-cussing comedy, explosive action, gross-out horror and creature-feature science fiction. Yet, the myriad of juxtaposing elements never feel out of whack and the cocktail concept never feels bloated. To Cornish’s credit: it works.

An obvious comparison would be to Anglo zom-com Shaun of the Dead (even more pertinent an association because both films share producers and star Nick Frost), but Attack lacks Shaun’s cosy charm, given the thuggish depravity of its main spliff-smoking, slang-spouting brats, who are introduced to us mugging student nurse Sam (Whittaker), taking her on 5:1. Ras-pect? Jog on, boys.

As their bluster bombs in the face of real danger, you will begin to warm to our posse of inner-city anti-heroes, as they team up with a reluctant Sam to fight the gremlins and evade the “Feds” (that’s the police to you and I) in between checking in with their curfew-administering ‘rents. The disparity between their public and private image is the source of much humour, particularly with two nine year old pipsqueaks who are desperate to join the adventure, arming themselves with cap guns, super-soakers and the laughably portentous pseudonyms “Props” and “Mayhem”.

As is often the case, the trailer all-too-successfully provides a snapshot clip show of the film’s funniest lines (“I just want to go home, lock my door, and play FIFA”), but at just under 90mins, Attack the Block never outstays its welcome, and most importantly never bores with its unrepentant onslaught. Nick Frost is criminally underused as pot-farming waster Ron, but the kidz are the real star of this show, even if you’ll leave the cinema still thinking they’re from another planet.


In a CR@B Shell: You’ll have initial trouble sympathising with the mouthy little shits, but you can’t deny their doggedness. Likewise, if you stick with Joe Cornish’s debut, you won’t be able to deny Attack isn’t a Block-busting tour de force which manages to be both great fun and bloody fierce entertainment. Boyakasha!
aaaaa
Created by ~ CR@B Howard ~ at 13:04