The Agony and the Ecstacy 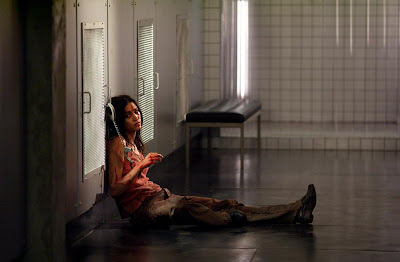 Bloody, brutal, savage, extreme, visceral, sadistic – all of these terms (and many more synonyms besides) could be thrown into a review of French horror Martyrs, and yet none of them could ever *quite* manage to best express just how fucked up this film is. It’s the kind of film you have to see, but you won’t want to. It’s powerful viewing, but it’s also unpleasantly hard viewing, and I can’t imagine anyone going back for seconds. Not because it isn’t any good (far from it), but because it’ll forever be engrained on the viewer’s subconscious.

Having escaped from an abandoned abattoir following a lengthy period of imprisonment, abuse and torture at just ten years old, traumatised Lucie (Jampanï) is still plagued by nightmarish visions of a truly terrifying primordial goblin-esque figure. 15 years later, and with the support and assistance of her only friend, fellow care home resident Anna (Alaoui), Lucie has tracked down the sick perpetrators responsible, and she’s intent on making them pay…

If my synopsis makes Martyrs sound a little familiar, a little generic, akin to I Spit on your Grave and its ilk of rape/revenge thrillers, then think again: the above is wrapped up within the first 45 minutes, and the film's second half plunges to new depths of depravity whilst transcending the binds of its oft-maligned genre and ascending to new heights of unprecedented originality, as Anna stumbles upon the dark-as-night secret behind Lucie’s juvenile imprisonment, and finds herself in a similarly unspeakable scenario. 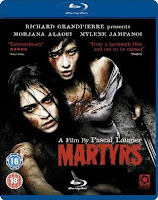 I won’t ruin it for you, as stripping away the meat from Martyrs’ bones will greatly reduce the potency of its appalling revelations. Nevertheless, a warning: I’ve watched a flood of limb-slicing, gore-splattered, frankly deplorable horror films in my time, and I’m not being hyperbolic when I rank Pascal Laugier’s film as one of the most shockingly severe my eyes have witnessed. But unlike shallow schlockers like City of the Living Dead, in this case I mean it as an immense compliment.


In a CR@B Shell: Prepare to be in equal parts astounded and revolted by this extraordinary Euro example of extreme transgressive cinema. Martyrs achieves exactly what it sets out to, and for that must be commended, but it is not an enjoyable viewing experience. Not for the weak of heart (or stomach).
aaaaa
Created by ~ CR@B Howard ~ at 11:31