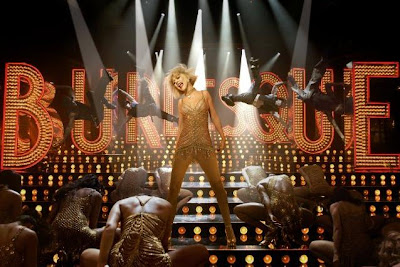 “She gave up her life to follow her dreams,
Left behind everything for the movie scene,
Nothing more she could want, she was determined to follow her plan,
She wanted Hollywood, she wanted it bad.”

Following up her disastrous Bionic LP (reviewed HERE), twenty-first century pop idol Christina Aguilera makes her impressively charismatic feature film debut in this predictable but spectacular musical riff on the age old cautionary tale of the American Dream, as outlined in my opening quote by a verse from the Michael Jackson track I nabbed the title from for this CR@Blog review.*

Too attractive and talented to be wasting away waitressing in an Iowa diner, confident Ali Rose (Aguilera) makes the bold decision to quit her job, pack her bags and head to the bright lights of Los Angeles in the hope of becoming a star.

Enticed into the “greatest view without windows”, resolute Ali all too swiftly bags herself a waitressing gig in downtown revue venue The Burlesque Lounge, owned by retired dancer Tess (Cher) but on the brink of being repossessed. It’s a popular (if niche) attraction, but all those sequins, shoes and corsets don’t come cheap. 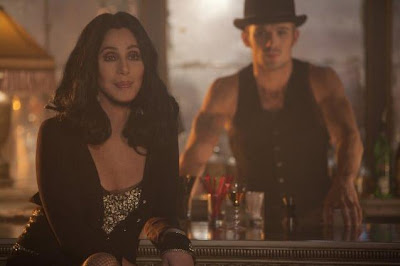 In the blink of a mascara-lined eye, Ali’s hidden talents have been revealed and she’s promoted to the stage where she upsets tardy diva Nikki ( Bell ) but makes fans of everyone else – including barman-come-musician Jack (Gigandet) and loaded potential business savour Markus (Dane). It's really that easy, gals.

I realise that I’m making it sound like I have a mountain of issues with Steve Antin’s Burlesque, but that’s only because I’m fully aware that the well-worn plot is the epitome of Cabaret conformity and this rags to riches tale is all too laden with fortune and stripped of seediness or misery – but that just makes the fact that I thought it was fabulous all the more astounding. I’m not going to hide behind a fan of feathers and pretend that this vivid extravaganza didn’t entertain me; because it did. 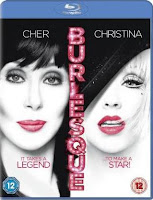 Nikki’s tantrums and jealous glares aside, everyone in the dance troupe and behind the scenes is far too nice, far too accepting and far too accommodating. You never feel any threat to Tess livelihood, Ali’s dreams or Jack’s relationship quandary because you know everything’s going to work out okay by curtains up. It’s not in the least bit realistic, granted, but then neither are the clichéd characters. However it is spirited and inspirational, and if the grandiose musical numbers don’t knock you out then you don’t have a pulse.