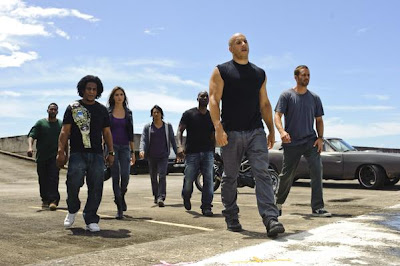 I won’t bullshit you: I had no real inclination to watch this film. The plan was to watch haunted house horror Insidious, but that was showing at a ridonkulous hour, so I gave this boy racer’s wet dream a try (despite being beyond uninterested in modified race cars and having never watched parts one to four in this series), and what d’ya know? I frickin’ loved it!

Sure, Fast Five is little more than a brainless, hammy, over-the-top, logic-defying exhibition, but what undeniable joy this ride is, as former FBI agent Brian O’Conner (Walker) and his girlfriend Mia Toretto (Brewster) use their circuit skillz to bust the latter’s brother, Dom (a decidedly chunky looking Diesel), out of the prison transport bus he was being taken away in at the end of Fast & Furious. And that’s just in the first five minutes! 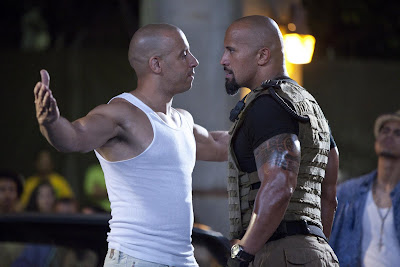 From then on, the law-evading trio agree to rendezvous in Rio de Janeiro , where they take on various black-market jobs which see them cross paths with old friends (Schulze, not seen since the first film) and make enemies of the lawless (Almeida). Before long they are wanted in Brazil , too, with special agent Luke Hobbs (Dwayne Johnson; great value) and his crack team of gun-totters drafted in to round our anti-heroes up. With a badass like the "The Rock" on your taillights, you’d just surrender - surely?

Well, no; apparently not. I told you logic wasn’t on this beauty's specifications. Still undeterred, Dom and Brian decide to assemble a band of accomplished and trusted car-mad cohorts including 2 Fast 2 Furious’s Roman Pearce (Gibson) and Tej Parker (Chris “Ludacris” Bridges) to perform a “mission in-freakin’-sanity”: steal the laundered fortune stockpiled by Almeida’s Hernan Reyes (Brazil’s most wanted crime lord). I don't even think Robin Hood would have had the balls!

All the men are muscle-pumped Adonis’s and all the women bikini-wearing Venus’s, but sexualised stereotypes aside, Chris Morgan’s script endows these characters with a cocksure invincibility which means they know they’re fit so live with it. After 40-or so minutes, a tremendous sense of humour also kicks in as the heist is formulated between bonding buddies old and new, enlivening the film’s spirit and perfectly complimenting the blockbusting spectacle. Fast Five knows it’s got little fuel in its tank, but you’ll be so busy drooling over the bodywork that you’ll scarcely notice that it’s running on fumes.


In a CR@B Shell: Well blow me down with a tank of nitrous oxide; I had an absolute blast watching a knuckleheaded film about automobiles! Fast Five revs up to top gear and never hits its brakes – I’m tempted to reverse back to the original and re-start this five-piece relay from the grid.
aaaaa
Created by ~ CR@B Howard ~ at 15:48