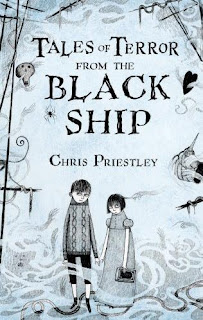 Having been so enraptured by gothic anthology Uncle Montague's Tales of Terror (reviewed HERE), I was genuinely ecstatic to discover that it was just the first in a (hopefully not yet finished) series of Tales of Terror from Cambridge author Chris Priestley. Book two, Black Ship, follows Uncle Montague's winning formula of having an obscure storyteller narrating thematically-associated supernatural chronicles to a young protagonist.

This time around we are marooned by a ravenous storm in the isolated cliff-perched dwelling The Old Inn, where home alone siblings Ethan and Cathy Matthew's are the scare-hungry youngsters bewitched by shelter-searching sailor Jonah Thackery's nightmarish ocean-orientated fables. Waiting for their father to return with the medicine they need to cure their ailing sickness, Ethan is guardedly cautious of their yarn-spinning guest, while Cathy seems transfixed and eager to be spooked.

The reveal in penultimate chapter “The Black Ship” that there is both more and less to Thackery's own history is disappointingly predictable, but the absolutely superb and genuinely spine-chilling twist in the conclusive “Wolfsbane” was an unanticipated knockout which raised the bar and blew me away, totally justifying the back cover warning: “This is a seriously scary book – younger readers be warned!”

Regrettably, away from the superior climax, while I still found Black Ship to be a well written and atmospheric collection, I have to admit that the other short stories were not quite up to the high standard set by Uncle Montague. There's a motley medley of macabre monstrosities without doubt – from vampires in the slave cargo (“Piroska”) to giant flesh eating snails (“Nature”), paranormal tattoo's (“Irezumi”) and an escaped exotic creature devastating a crew of scavenging pirates (“The Monkey”) – but, ultimately, none of the tales are as dark, daring or deadly as last time around.


In a CR@B Shell: Lacking the emphatic bite which made Uncle Montague such a ghoulish treat, but nevertheless as engrossing and enjoyably digestible as the original; Tales of Terror from the Black Ship is saved from sinking by a devilishly remarkable eleventh hour shock in the spectacular final chapter. Shades of genius to be shore.
aaaaa
Created by ~ CR@B Howard ~ at 13:46