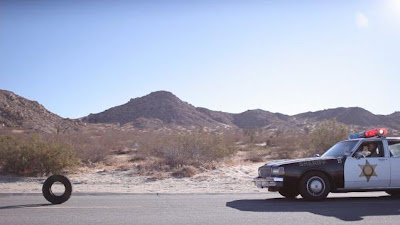 In today’s desolate and arid cinematic landscape where CGI hullabaloozas, revenue-determined sequels and fruitless remakes are the order of the day, adventurous filmmaker Quentin Dupiex (AKA “Flat Beat” music producer Mr Oizo – remember him guys and gals?) must at least be congratulated for thinking completely outside the box in his search for a wholly original premise: his bizarre 2010 horror-comedy, Rubber, stars a sentient murderous car tyre with psychokinetic powers as its antihero.

Yep, you read that correctly.

On paper, this self-confessed homage to “no reason” sounds like an absolute rollicking blast of a B movie – how could a film about an animated tyre which can lock doors, turn on showers, switch television channels and make people’s heads explode be anything *but* mind-blowingly bonkers fun?! Well, you're about to find out, because despite a truly uncanny central conceit, Rubber is – even at a trim 80minutes – agonisingly and unforgivably slow going. 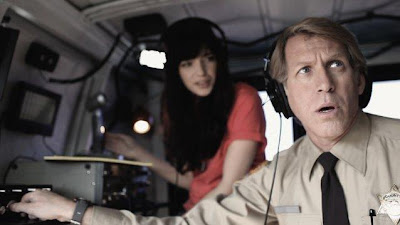 The first 20minutes are the real pace-zapping culprits, dragging the film into a boring lull even bloody carnage can't lift it out of. We are introduced to a group of spectators who are stood out in the desert watching and commenting on the film-within-a-film taking place before them – a film which only some of the “actors” think is scripted and others believe is completely authentic. It’s a supposedly avant-garde comment on people enjoying unrealistic films despite nothing on screen making a jot of sense – except Dupiex forgot to inject his "innovative" absurdity with even an iota of fun.

As the rolling rascal executes rabbits and scorpions (just for kicks) and becomes infatuated with a cute brunette motorist (Mesquida), what should have had me rolling about in hysterics at its kookiness had be getting genuinely angry with how terribly everything was handled. I haven’t been this infuriated by narrative inconsistencies since Lucio Fulci’s detestable City of the Living Dead (reviewed HERE). Tacky rot The Room (reviewed HERE) may not have had a percentage of Rubber's admittedly slick production values, but at least it brought joy to its audience – even if it was unintentional! 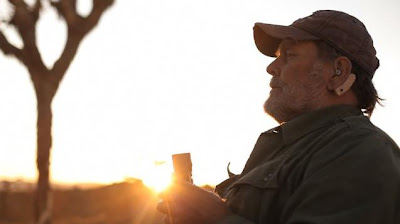 Rubber basically tries too hard to be daring and experimental – but clearly there’s a damn good reason why there’s never been a film about a killer wheel covering before: it's stoopid! Dupiex’s tongue-in-cheek utilization of the metafiction literary device also fails spectacularly: the on-screen audience initially want to watch the horror unfold through binoculars, but they are deprived of food and water and made to sleep in the desert as if being tortured, before an oddball director's lackey (Plotnik) slaughters a turkey for them to devour, which he has poisoned to kill them all off!! Say WHAT?!

All, that is, except one: a gruff guy in a wheelchair (Hauser) who refused to eat the raw “feast”. Thus, the slapdash “show” must go on for his sole amusement! It is never determined whether some, all or no part of the farce is real or fake, as the incredulities pile ever higher – the lackey later scoffs a table of food he surely knows is poisoned because he was the one who poisoned the turkey, killing himself while the wheelchair-bound spectator seems unaffected by any of the people keeling over around him!! 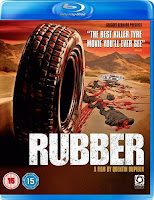 Ultimately, my frustration mounted to breaking point because there was simply no point questioning why anything was happening, as the same answer kept being thrown back at us: “no reason” – but that really isn’t good enough, leading to a perplexing, inconsistent, one-dimensional and unsatisfying jumble of garbage which misplaces any artistic direction or ironic intent it may have started with and doesn’t even impress on a solely shallow comedic or horrific level either.


In a CR@B Shell: An exasperating waste of time, Rubber squanders a potentially killer premise in an unexpectedly dull and demented one-joke Z movie which thinks it’s clever but manages to evade even its own “ironic” philosophy by asserting that there is absolutely no sense to any of it. Total burn out.
aaaaa
Created by ~ CR@B Howard ~ at 11:47