To the Moon and Bark 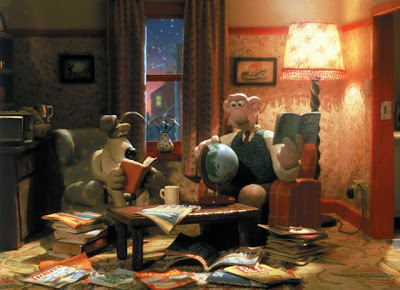 It is virtually inconceivable to me that the debut adventure of eccentric inventor Wallace and his ever-loyal pooch Gromit blasted onto our screens some twenty two years ago – where has the time gone?! Nevertheless, it is a compliment to the resonantly British character’s timeless appeal that even their most crudely-animated exploit is as captivating and re-watchable as it was in 1989.

Epic in scope but simple in plot, A Grand Day Out sees the quirky Yorkshire cheese-chomper (voiced by Last of the Summer Wine’s Sallis) recoil in horror as he realises he is out of his favourite dairy product – on a Bank Holiday weekend, no less! It is then that he hits upon the idea of taking the day trip to end all day trips: by taking a literal flight of fancy to a place where cheese is plentiful, because it's made of the stuff – the moon.

Assisted by his silently expressive canine cohort, Wallace sets about sketching then crafting a rocket in his cellar out of old doors, orange paint and plenty of D.I.Y. pizzazz, before setting off to their dream holiday locale – with a bounty of crackers for their ultimate picnic experience. 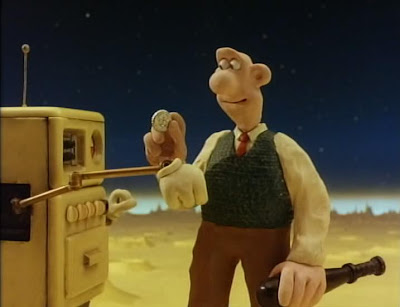 Ludicrously OTT yet charmingly endearing in its child-like naivety, A Grand Day Out is by far the most unrealistic of these plastercine pals’ four outrageous half-hour escapades (therefore making it rather hard to jump the shark when they’ve already snacked on “moon cheddar” by jetting off in a home made rocket) and yet it is still intrinsically grounded in the quirks and relationship between one man and his dog.

It is interesting to watch how Wallace treats Gromit, clearly his best – if not only – friend, and yet he still very much sees himself as the dog’s “owner”: patting him patronisingly on the head, expecting his loyalty and obedience, and then blaming him when things don’t go to plan (“You forgot to light the fuse, Gromit!” – despite that being Wallace’s job upon take off).

Despite his obvious embarrassment at his master’s camp foibles, Gromit is nonetheless ever-faithful and always on hand to get them out of a jam or, as is the case here, actually fly the rocket while Wallace sits back and reads the paper!! He is the straight man to Wallace’s fool, yet there is true love and admiration between these two oddball characters and this endears them to us, even if we do enjoy a snigger at their well-intentioned misfortunes.

Finally, full credit to creator and auteur Nick Park, who worked tirelessly for six years to complete his vision, which truly revolutionised not only Aardman Animation, but claymation as an art form. True, in the years since he has perfectly his talent, smoothing over the bumps and lessening the number of obvious fingerprints on his sculptures, but for him to enthrall us not only with the actions of a quirky old man and his pet but also a Moon-living “Cooker” contraption which has very humane dreams of returning to Earth and learning to ski, is an outstanding accomplishment.


In a CR@B Shell: The kooky plot is probably only worthy of 3*s, but the lovable characters and attention to detail propel A Grand Day Out into the stratosphere. Wallace & Gromit’s first adventure is literally out of this world – and they never looked back.
aaaaa
Created by ~ CR@B Howard ~ at 04:02