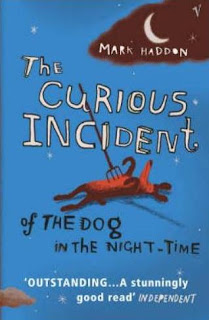 Children’s author and screenwriter Mark Haddon’s first foray into adult literature, The Curious Incident of the Dog in the Night-time, is a remarkably absorbing and dedicatedly thorough account of how coping with a child with Asperger’s Syndrome can tear a family apart.

Written from the perspective of savant teenage narrator Christopher Francis Boone’s logically methodical yet emotionally distant point of view, The Curious Incident is in equal turns a wonderful, courageous and frustrating character piece masquerading as a murder mystery novel.

The deserved winner of multiple esteemed literary awards upon its release six years ago, I can’t quite justify exactly why it has taken me this darn long to catch up with the book – especially considering how much I enjoyed Haddon’s sophomore dip into adult fiction: 2006’s A Spot of Bother.

Despite being widely disparate in characters and premise, both novels demonstrate an astonishingly acute insight into the obsessions and sufferings – major and minor – which contribute to “normal” human behaviour, whether inflicted or not, and it is a shame Haddon hasn’t written more for this demographic.

Written in Christopher’s frank unflourished style (there are many uses of the phrase “and then this happened…”), The Curious Incident’s narrative body is mottled with illustrated depictions of complex mathematical equations, street maps, road signs and visual identitifiers which assist Christopher in manoeuvring that which so terrifies him (the world at large) and aids his selfish mindset in understanding the needs and emotions of those close to him. It also aids us in associating with his naïve outlook.

Ignorant to his own inconsiderate actions, the novel can at times be eye-openingly exasperating – people who care for this boy must repeatedly forfeit their own pride and freedom for the good of a person who fails to appreciate their sacrifices or reciprocate their affection (Christopher hates to be touched, often screaming, raging or wetting himself if he is handled) – and they are driven to making difficult, heartbreaking and controversial decisions for the good of their own livelihood.

Doggedly determined to solve the mystery of who murdered his neighbour’s canine pet, Wellington, with a pitch fork, Christopher meticulously documents his amateur sleuthing as if solving a maths problem; an investigation which is hindered by his antisocial condition, an understandably over-protective father and Christopher’s restricted concept of acceptable behaviour. 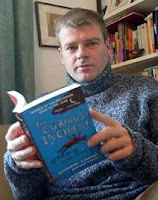 Ultimately, the investigation leads Christopher to make a startlingly life-changing discovery – one which I felt every bit as much as our narrator simply because the tunnel-visioned perspective offers us no information outside what Christopher chooses to share. That Mark Haddon was still able to craft a fully realised diegesis from this bold restriction simply adds to my admiration for this committedly crafted testament to the human spirit.


In a CR@B Shell: Despite its naïve authorial voice, The Curious Incident is hardly lightweight reading. Nevertheless, this is an outstandingly rewarding novel which truly opens your eyes to the day-to-day struggles of those suffering from autism – and those who love them. As Christopher would exemplify :-)
aaaaa
Created by ~ CR@B Howard ~ at 14:45