Yeah, it's a loose, negligible link for a triumvirate of reviews for three vastly disparate films – but I needed a title and it kinda works so shuddupayourface! 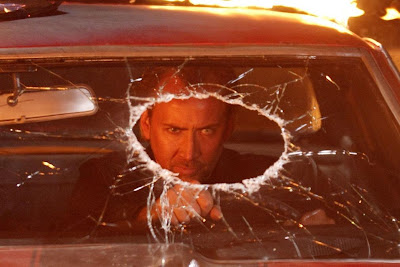 Anyone who complained that Ghost Rider was too child-friendly are granted a second opportunity to see Nicolas Cage play a bad-ass dead man who returns to our mortal coil, apprehends a stylish vehicle-of-choice and deals vengeance to the bad guys – this time with a no-holds-barred 18 rating! Ummm: yay...?

Drive Angry is clearly meant to be a ludicrous, outrageous, testosterone-pumped guilty pleasure. Director Patrick My Bloody Valentine Lussier clearly had high hopes that it would garner a cult status akin to old skool grindhouse B-movies, but it failed. Spectacularly. Probably because it was trying too frickin' hard.

Cage's Milton is out to stop the leader of a Satanic cult, Jonah King (an impressively loopy Billy Burke), from sacrificing his murdered daughter's kidnapped baby. Seriously. Along the way he picks up a hot passenger (Amber The Joneses Heard), shoots a bevy of enemies whil

st shagging a barmaid and comes face-to-face with The Accountant (William Fichtner), a tricksy messenger who is hell-bent on dragging Milton back to the fiery depths from whence he escaped.

Maybe I wasn't drunk enough, but I found most of the outlandish gun-totting, van-rolling, flame-throwing set-pieces to be comically lame rather than jaw-droppingly spectacular; some even bordered on farcical. But then away from a 3D cinema screening, the visual effects were appallingly ropey for a film of this calibre - and this budget. 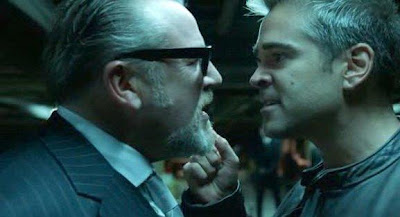 Adapted from the Ken Bruen novel and directed by first-time helmer William Monahan, this recent cockney gangster drama is a prime example of all guts, no glory. London Boulevard desperately wants to be taken seriously as a legitimate genre heavyweight, but it comes off as a contrived and overreaching pretender to the throne. Given the pedigree of talent both in front and behind the camera, it's a crying shame – Monahan's impressive CV includes screenplay credits for The Departed, Body of Lies and Kingdom of Heaven.

Colin Farrell plays Mitchel, recently released from prison and determined to go straight. He finds genuine work as a bodyguard for paparrazzi-fodder starlet Charlotte (Kiera Knightley), but his reputation amongst the law-dodging elite means everyone wants to work with him – even sadistic kingpin Gant (Ray Winstone), who you really don't want to mess with. Will Mitchel be able to turn his back on his former life and devote his attention to the alluring-but-emotionally-fragile actress, or will be get dragged back down into London's criminal underbelly?

Fundamentally, London Boulevard fails because so much is thrown at the screen but nothing sticks: too many subsidiary characters and seemingly weighty subplots saturate our affection to the point of indifference; big name stars (Eddie Marsan, Anna Friel) are scandalously wasted; the central love affair takes an age meandering in lukewarm chit-chat then leaps forward drastically in the space of a single scene; while cartoon-y mobster cliches are as ripe as the embarrassingly vulgar language and snatches of senseless brutality in this grimy presentation. 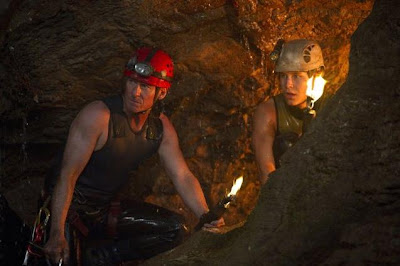 When he isn't spending years perfecting box office gold, James Avatar Cameron is embracing his love of technology and underwater beauty with breathtaking oceanic documentaries such as Aliens of the Deep and Ghosts of the Abyss. So it's little surprise that he was only too happy to attach his name to this Australian cave diving drama which is based on true events.

Exploring a hither-to uncharted underground cave system in Papua New Guinea, a team of cave divers find their only escape route cut off by a freak tropical storm. Combating the rising sense of panic, the dwindling-but-determined expedition must traverse the treacherous underwater labyrinth in the hope of finding daylight before their supplies run out and they are trapped forever.

Comparisons to similarly-set claustrophobic creature features such as The Descent and The Cave are unavoidable, but Sanctum is a very real horror; and all the more effective for it. Narratively, its greatest strength is the fluctuating relationship between headstrong/heartless team leader Frank (Richard Roxburgh) and his uninterested son Josh (Russell Howard lookalike Rhys Wakefield), mainly because they are the only characters who are fleshed out, but if I'm being candid, the story pales next to the stunning location shots of nature at its most magnificent.