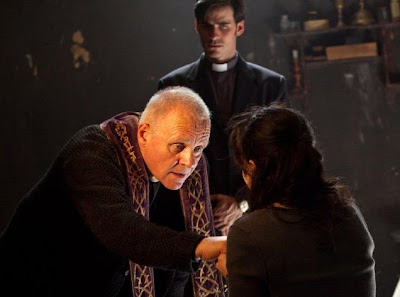 An evocative – if hardly groundbreaking – exorcism thriller, The Rite’s possession of its audience is fatally weakened by the absolutely absurd PR claim that it is inspired by a true story. True, it was extracted and adapted from research into Vatican-sponsored exorcism seminars as covered in co-writer Matt Baglio’s 2005 non-fiction book (available HERE), but any hold on reality is soon undermined by a desire to shock n’ scare with stock supernatural conventions rehashed from every previous film of the same ilk (including last year's admirable The Last Exorcism, which I reviewed HERE).

A mid-credits addendum to the loose but proudly-stated assertion (slyly hidden away in the hope no-one will see it) even confesses that despite its inspiration, The Rite is a wholly fictional creation – in case you needed persuading that Baglio didn’t really witness actual cases of demonic possession in Rome!! Chances are we *may* have heard about it from every newsroom or Twitter-feed in the world if he did…

Away from the dubious marketing ploy, The Rite is an engaging enough beast: part philosophical conversation on conversion, part eerie chiller. There are flashes of horror as disillusioned doubter Michael Kovac (O’Donoghue) is invited to assist famed exorcist Father Lucas (Hopkins) in his demon-purging duties, but out-and-out scare-fest was never director Mikael 1408 Håfström’s intention (“Were you expecting head-spinning and pea soup?” Lucas enquires of a cynical Kovac).


In a CR@B Shell: An unsettlingly atmospheric character-centric supernatural account of faith versus logic in our sceptical scientific age. An engaging story and bold performance from Hopkins go some small way to making up for a dribbling pace and indefensible PR misstep.
aaaaa
Created by ~ CR@B Howard ~ at 13:21