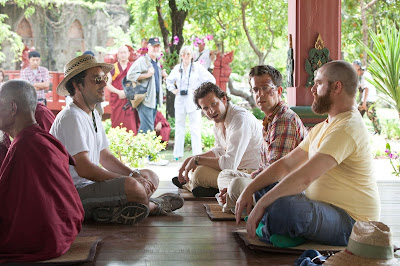 Back in the swirling mists of time – well, 18months ago to be precise – I published a pithy paragraph long review of what many critics were proclaiming the “funniest film of the year”: The Hangover (travel back to the early days of The CR@B Shack by clicking on this ‘ere LINK). I disagreed. It wasn’t so much that I hated the stag party misadventures of Phil (Cooper), Stu (Helms) and Alan (Galifianakis), simply that, after all the hype, it wasn’t the funniest film of 2009; merely chucklesome at best. I awarded it an average 3/5.

Inevitably with any box office smash, the studio saw dollar signs and a sequel was promptly green lit, imaginatively called The Hangover Part II (wouldn’t Another Hangover have been catchier?), to be released at the tail end of May this year. I decided to give it a chance, hoping a second dose of inane drunken misfortune would up the ante of the first and deliver heartier laughs. After sold out screenings and a Rod Stewart concert (see HERE) foiled my attempts to attend a screening, last night The Hangover Part II finally caught up with me – and boy was my head sore!

Not because I laughed so much it hurt, sadly, or because I drank myself into oblivion in some sort of ridonkulous homage to the onscreen action, waking this morning unable to remember a thing about what I had witnessed (although part of me wishes I had). No, dear readers, my head hurt because I was so utterly dumbfounded by what was playing on the cinema screen in front of me. 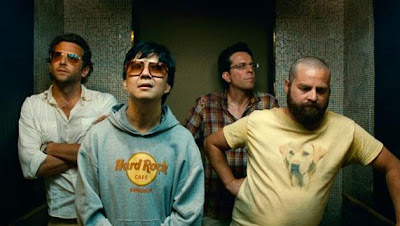 Shifting the action from Las Vegas to Thailand , Todd Philips' much anticipated sequel is otherwise content simply to give its audience more of the same - even down to an awkward scene in an elevator! On an impromptu stag night prior to Stu’s marriage to Lauren (Chung), the self-proclaimed Wolfpack wake up after what was meant to be “one beer on the beach” with a chain smoking capuchin monkey, a severed finger and returning hyperactive gangster Leslie (Community’s zanily irreverent Jeong) in a dirty Bangkok hotel room.

To make matters worse, Alan’s head has been shaved, groom-to-be Ed is emblazoned with a Mike Tyson-riffing, copyright-infringing (seriously) facial tattoo, his fiancée’s younger brother – teen genius Teddy (Lee) – is missing, and no-one has a clue what the hell happened on the preceding evening. Cue an hour and a half of escalating madness as the oddball gang attempt to piece together clues and retrace their steps to track down Teddy and make it to the wedding on time.

It’s an outrageous and barmy escapade to be sure, as the Wolfpack are shot at by Russian drug dealers, threatened by a mobster (a refreshing cameo by Giamatti), beaten by mute monks (!!) and follow infinite false leads before they come to the conclusion that maybe Teddy hadn’t travelled quite as far as they first thought (deja vu much?). Alas, the ludicrous is also intermingled with the raunchy and outright offensive – a strip club of Lady-boys whom Ed had drunken anal sex with being a definite moral low – resulting in a lot of grown men shrieking incessantly as their celebration turns increasing dark and distasteful.

My main bone of contention lies with clueless simpleton Alan, whose brainlessness and social naivety veers from ignorance to mentally unsound throughout. I just didn’t find him at all funny and I question how anyone can laugh at a man so inherently unlikeable: he isn’t simply the friend who faux pas’ to the point of embarrassment – he’s a dangerous prescription pill-popping lunatic who’s completely oblivious to his own erroneous actions and I found nothing to like about him.


In a CR@B Shell: After a night as wildly calamitous as their trip to Vegas, the Wolfpack should have declared “never again” – and so should co-writer/director Todd Philips, who has delivered a nigh on duplicate disaster in The Hangover Part II, albeit one which leaves an even more unpleasant taste in the mouth.
aaaaa
Created by ~ CR@B Howard ~ at 03:21