Despite my continued admiration for the underrated 2004 Ashton Kutcher-starring thriller, even I was surprised to find they had produced a third Butterfly Effect film. After all, the first direct-to-video sequel from 2006 was such a limp and limited cut-price retread of the original’s philosophical time-travel plot device that it barely justified filming; the conclusion achingly predictable.

Mercifully, Revelations is a very different butterfly indeed. True, it still incorporates the familiar “Change one thing, change everything” premise into its mind-bending narrative, but an ever-altering murder-mystery element and an injection of sex and graphic brutality (no doubt at the suggestion of horror house After Dark Films*, who came onboard as distributors) help spice up the time-jumping core concept.

Sam Reide (The O.C.’s Carmack) has long learned to control the gift Evan Treborn introduced us to in The Butterfly Effect. Monitored by his psychologically introverted hermit of a sister, Jenna (former Mrs. Macaulay Culkin, Miner), Sam uses his phenomenal ability to aid the police in tracking down murderers and criminals by travelling back to witness the crimes being committed. He must never interfere, or he risks altering the timeline and severely changing life as he knows it. 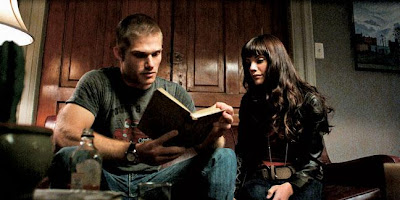 He is happy to keep to this self-inflicting rule. That is until Elizabeth Brown (Habel), the sister of Sam’s long murdered high school girlfriend (Serafino), walks back into his life and begs him to use his gifts to identify her sister’s real killer and exonerate the innocent man (Wilkinson) who is about to be executed for the decade-old crime.

Against the recommendations of Goldberg (Yon), the man who tutored him in time travel, Sam takes the case and begins his unmonitored jumps into the past. Inevitably, the more he tries to help, the more he perverts the timeline, and his rash actions soon lead to the “creation” of a serial killer who is still on the loose. When Goldberg goes missing and Sam’s livelihood deteriorates, he must do all he can to track down the “Pontiac killer” before he is convicted for the murders himself.

Now obviously the whole leaping-back-into-your-body-from-yesteryear premise is utter wish-fulfilment gubbins, and I suspect Revelations gets tangled in a web of impossible paradoxes as Sam jumps time-and-again, his situation ever-worsening as he loses his grip on what is real in the reality he now inhabits, but regardless of logistics I was incredibly impressed by the film's density; a lot of thought has gone into this intricately constructed mind-fuck of a standalone story – a compliment (and it is a compliment) which cannot be levelled at The Butterfly Effect 2.

Personally, I could have done without the excessive mutilation scenes – the camera lingering a little too long on slashed-open corpses and blood-splattered limbs – and the wholly unnecessary soft core pornography. Now, I’m in no way opposed to such mature elements if they are warranted, but they are foreign to this franchise and thus all the more obvious. Furthermore, Revelations didn’t need to cheapen itself with such shameless titillation and gimmicky shocks when the story was enthralling enough without it.

Finally, I must applaud the deliciously dark conclusion, which – following the unforeseen reveal of the killer’s identity and the disturbing reasons behind the glut of murders – sees Sam jump back to a rather crucial milestone in his family’s history and make a difficult but altogether necessary decision for the good of the people he loves. It adds further fuel to my belief that this is a complex and emotionally superior sequel which far outshines its lazy predecessor, and it’s a pity Revelations has been buried on DVD and pigeonholed as a second rate horror.