Controversially, I have always had very much a take-them-or-leave-them attitude towards the big screen adventures of Marvel Comic’s popular mutant super squad: even the much-lauded X2 didn’t swing my opinion. In point of fact I fell asleep during X-Men: The Last Stand and to this day have yet to rewatch it, while the least well-received critically – X-Men Origins: Wolverine – I honestly didn’t mind, although I recognised it for the shallow blockbuster it was and nothing more.

X-Men: First Class however, as the title implies, is set before all of these – taking us right back to the very beginning; before Charles “Professor X” Xavier (McAvoy) was bald and before Erik “Magneto” Lehnsherr (Fassbender) was wrinkly, when the adversaries were friends united in the same cause before a rather monumentous difference of opinion regarding mutant-kind’s association with humans forced an X-shaped wedge between them which saw them take very divergent paths…

Set predominantly in the 1960s before a very real backdrop of the Cuban Missile Crisis, First Class sees Xavier and Lehnsherr fly around the globe recruiting those with unique superhuman abilities to join their resistance and live out and proud, in the shadows no more. During the two hour bonanza we are introduced to youthful depictions of “Mystique” (Lawrence), “The Beast” (Skins’ Hoult), “Angel” (Kravitz), “Banshee” (Landry Jones), “Havoc” (Till), “Darwin” (Gathegi), “Riptide” (González) and “Azazel” (Flemyng) – it’s quite an ensemble cast and some players get far more attention than others. 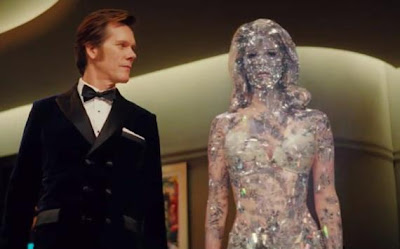 There are a cascade of ret-con explanations for how each of the character’s got their nicknames (it’s rather unspectacular to be honest), how “Magneto” came by his iconic metal helmet, how Xavier came to be paralysed and wheelchair-bound, and even a nifty cameo for a certain gnarled adamantium-clawed icon (whose origin has, of course, already been mauled to death).

They are the kind of fan-friendly winks to the audience which are neat when used sparingly but can get somewhat tiresome en mass. However, First Class compliments the call-backs (or should that be call-forwards?) with its own distinct story in its own distinct era. To claim it’s a reinvention or fresh start akin to Christopher Nolan’s Batman Begins, however, is somewhat misrepresentative: this is very much the same Bryan Singer-produced X-verse, merely earlier.

Kevin Bacon mines his devious Hollow Man persona as former Nazi soldier turned megalomaniac mutant nemesis Sebastian Shaw who is hell-bent on causing nuclear war and bringing mankind to its knees. He isn’t quite as imposing or memorable as a comic book supervillian should be (particularly not when he surrounds himself with scantily clad lovely January Jones as Emma Frost), but you’ll certainly sympathise with vengeful Lehnsherr for wanting him dead.


In a CR@B Shell: Cooler and more collected than most hyperactive comic book blockbusters, X-Men: First Class manages to intertwine itself in the Marvel super-team’s expansive legacy whilst also telling a distinctive tale all its own. Whether we necessary needed a prequel, however, is something of a moot point…
aaaaa
Created by ~ CR@B Howard ~ at 13:45