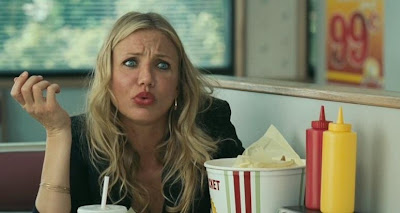 If you thought the high school students of American Pie were a puerile bunch of sex-obsessed wasters, then you haven’t met Elizabeth Halsey (Cameron Diaz); the most foul-mouthed, vain, materialistic, responsibility-dodging layabout at John Adams Middle School – and she’s a teacher!

Dumped by her prosperous fiancé for being a vacuous gold-digger, Elizabeth returns to the profession she despises to make ends meet, wherein she sticks on a continuous run of videos to amuse her pupils while she sets about winning over hot-bodied goody-goody substitute – and, most importantly for our Bad Teacher – heir to a wristwatch empire, Scott Delacorte (Diaz’s real-life ex Justin The Social Network Timberlake).

Problem is that Scott has fallen for over-zealous star teacher Amy Squirrel (Dinner for Schmucks’ Lucy Punch; as loopy as ever), while Elizabeth attracts the unwanted attention of grounded – but broke – gym teacher Russell Gettis (Gulliver’s Travels’ dopey Jason Segel). Certain that a boob job will win over minted Scott, Elizabeth undertakes all manner of back-handed and down-right illegal ventures to raise the necessary funds for the life-changing op. 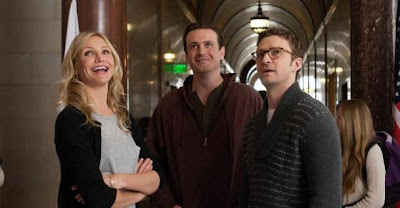 While sniggersome in places (it’s the age-old juxtaposition of people of authority acting inappropriately against type), Bad Teacher isn’t quite the off-the-hook riot the trailer promised, while the mortification factor is understandable given that the writing duo are regular scribes on NBC’s squirm-fest The Office . But whereas Michael Scott’s misguided work-based shame was buffeted by heart, Elizabeth is curiously void of emotion or a moral compass.

Watching Diaz manipulate her peers while cruising through life smoking pot, snoozing in class and cursing at children does get rather old after an hour and a half, and only sarcastic Russell comes out of the film with a modicum of decency (even if he's hardly a prize catch); Amy’s career-minded determinism quickly shifts to envy and suspicion while sickening Scott is quite simply a douche.

While the third act game-changing revelation that producing a class of top grades in the state test will bag the triumphant teacher a hefty bonus does make Elizabeth change tack and buckle down, Scott’s plot arc soon fizzles out, hampered by a bizarre hole in the story which sees him decide without any form of hesitancy that it’s perfectly acceptable to dry hump Elizabeth on a school trip while his girlfriend is ill at home!! Was there a scene missing or did I blackout through a major decision? Either way, he’s still a douche.


In a CR@B Shell: Diaz’s one-dimensional Bad Teacher is rescued from crude humiliation by a faculty of kooky characters, but as funny as it is while it’s on, Jake Kasdan’s school comedy is as unmemorable as one of Elizabeth’s skive-easy lessons. This average effort barely scrapes a trio of ticks but must try harder.
aaaaa
Created by ~ CR@B Howard ~ at 14:54