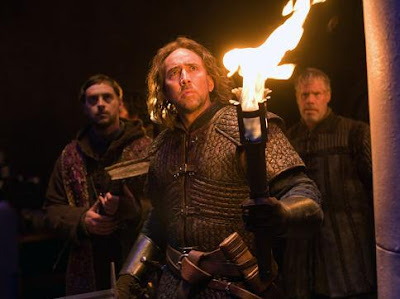 Despite receiving a near unanimous critical mauling upon its theatrical release back in January, I still found much to enjoy in this swashbuckling blend of medieval quest and supernatural horror from the director of Swordfish, based on a decade old spec script which shifted between studios a suspicious number of times before Relativity Media produced it as their first in-house venture.

The permeantly unenthused Nicolas Drive Angry 3D Cage and Ron Hellboy Perlman team up as aggrieved knights Behman and Felson who quit their dishonourable order and return from a Catholic crusade (read: bloody massacre) to find their homeland ravaged by the Black Death.

Arrested for being deserters, the pair are charged by a dying Cardinal (Christopher Lee; barely recognisable beneath grotesquely disfiguring make-up) to escort a girl accused of witchcraft (Claire Foy) to a remote monastery to "stand trial" (read: be exorcised) and – in doing so, they hope – rid the land of plague. Well, it sure beats rotting in a jail cell. Right? 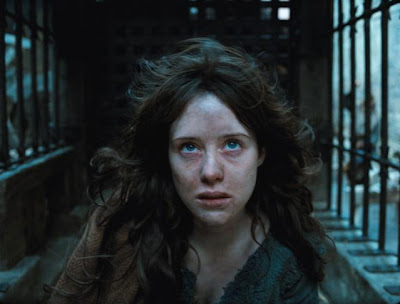 Accompanied by a band of priests, alter boys, knights and rogues – including Misfits' affable screwball Robert Sheenan, who impresses on the big screen – Felson and Behman set off on their old school road trip, ever-fearful of the prospect of being in such close quarters to a witch. As they journey on through foreign lands and spooky forests, disagreements rage and numbers dwindle in mysterious circumstances, until the girl’s true form is finally revealed.

If you liked last year’s Soloman Kane, chances are you’ll like Season of the Witch, which could very well inhabit the same universe, so akin are they in themes and tone. While Season would have benefitted from an 18 rating and more unreserved horror (it was toned down in production to be more teen-friendly and, sadly, the home release doesn’t offer a bloodier Extended Cut), there is still much supernatural splendour on offer in this unrelenting escapade.

It’s a minor gripe, but the “twist” in the denouement barely qualifies as such (it’s an issue with semantics, really) and the ensuing battle betwixt good and evil is diminished by the foe being all too obviously a CGI creation. Nevertheless, this is still a decent enough – if frivolous – swords and sorcery romp in the style of a classic B-movie. Season of the Witch may have its detractors but it delivers well enough as a schlocky Saturday k-night rental.


In a CR@B Shell: Sure, it’s high concept fantasy fare which won’t win any awards, but this is no Uwe Boll disaster (and Perlman knows all about those… *cough*In The Name of the King*cough*). Switch off your brain, switch on Season of the Witch and be dazzled by the entertaining barrage of gallant and ghoulish goings on.
aaaaa
Created by ~ CR@B Howard ~ at 10:21