To the Manor Dead 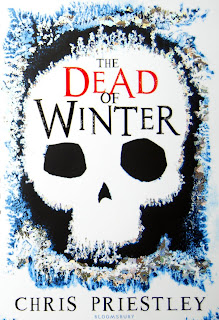 In an attempt to temperate my ravenous consumption of the marvellous “Tales of Terror” series from Cambridge’s own young adult horror author Chris Priestley (click the links for my reviews of Uncle Montague and Black Ship), I decided to jump forward to his latest release; once again a ghost story with a young protagonist, but this time a singular extended story rather than an anthology of quick-fire yarns.

Newly orphaned Michael Vyner is this tale’s diminutive narrator, recalling the “heartbeat hastening” events of the last Christmas, where he was obligated to leave behind the life he knew to spend the holidays in the desolate and shadowy Hawton Mere, an ancient East Anglian abode which is home to his enigmatic and aloof guardian – the sickly Sir Stephen Clarendon – and a solitary woman in white who wanders the snow-covered fens…

The Dead of Winter could quite easily have been reduced to a 20/30 page short story from a “Tales of Terror” compilation, which is not to say it is an agonisingly drawn-out or humdrum affair when spread over a novel’s length, only that a lot of the time is spent accumulating a chilling ambience – shadows in the darkness, knocking behind walls, ghosts in the mist, etcetera – while the plot is never thick or complex. But then this is horror aimed at a teen audience.

Priestley’s descriptive prose is his greatest creative strength – he has great fun with his graphic and evocative imagery and metaphors, conjuring up a truly fearful vibe from the slightest of actions or most sensitive of sentiments. Par exemple:

“As I recoiled in horror, her face shone with a light of pure evil. Her eyes
that had been so bright in life were now white marbles, as if the fire had
licked all colour from them. She was like some spider who had waited for this
moment, and now the moment came…”

While the climatic clarification of the ghoulish goings-on did fall a little short of Uncle Montague’s extreme depravity (a wonderfully creepy faceless boy with just a mouth for shrieking in agony and the supernatural ability to morph into a giant arachno-lizard creature was sadly underused) and the solution to the overriding mystery of how Sir Stephen’s beloved wife died was all too predictable, what did impress me about The Dead of Winter was how well Priestley handled the increasing cast of supporting characters.

Cooks, lawyers, coachmen, servants, guardians, sisters; all play a part – for better or worse – in Michael’s sorrowful secluded stay at Hawton Mere, and none are given short shrift in the narrator’s first-person account. Even if they depart for extended periods of time, their presence is always felt by their absence, most notably Sir Stephen’s lawyer, Tristan Jerwood, who Michael gradually warms to and comes to see as a confidant, missing this new-found friend who must leave on business for long periods at a time. Of course this desire for companionship is only natural when your parent’s have died and you are imprisoned in an alien environment.

This kind of continuity may seem insignificant to some, but it is crucial to producing a consistent and relatable chronicle (particularly as Michael is only a child and – no matter how brave – still dependant on support from his elders), and it impressed me as proof that Priestley – an author who I have become acquainted with as a short story scribe – and his compellingly lurid shocks can translate to longer stories. I fervently await Mr Creecher, which is due for hardback release in October.


In a CR@B Shell: While not as vividly distasteful as the gloriously grotesque Uncle Montague, The Dead of Winter still succeeds as an old fashioned gothic yuletide nightmare in the fashion of Dennis Wheatley and Henry James ghost stories; not least because of Priestley’s slow-building tension and disturbingly macabre ambience.
aaaaa
Created by ~ CR@B Howard ~ at 12:38