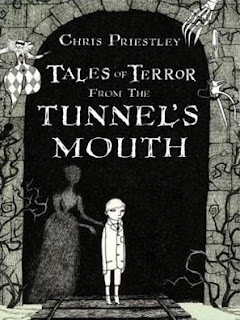 And so I have reached the end of the line: the third and final (to date) portmanteau Tales of Terror anthology from modern master of the macabre Chris Priestley. What a bittersweet joy it was to disembark from this scenic journey; I really could read these wicked little yarns all day long! I just hope that more instalments are forthcoming following the release of Priestley’s Frankenstein-esque novel, Mr Creecher, in October.

Despite recycling the same storyteller-and-audience framework established in Uncle Montague (click HERE for my review) and Black Ship (HERE), I was still enraptured by the ambiguity which surrounded Tunnel's Mouth's peculiar story time: who is this detail-reluctant Woman in White who has boarded the train to Kings Cross, why is schoolboy Robert Harper so quick to submit to her spectral stories despite his uncertainty towards his curious carriage companion, and what is keeping Robert's neighbouring passengers in such a deep trance-like slumber?

As the train draws to an unexpected stop at the mouth of a foreboding dark tunnel, its steep enbankment cloacking the carriage in an unnatural twilight, the mystery surrounding the strange, unrelenting storyteller steams forward undeterred as logical Robert senses supernatural forces are at work: why else does he keep having such vivid dreams of the make-believe yarns she spins, why else do his legs feel weak and his eyes so heavy at this time of day, and why else can he not rouse the dozing commuters around him?

Priestley shrewdly works in a delightful correlation to the dreadful events in Uncle Montague – making it feel like Robert inhabits the same shared, nightmarish universe as the eccentric teacher from hell – and while the pay off at the climax isn’t as bone-chillingly ghastly as Black Ship’s startling sting in the tale, it is nevertheless a well-worked – and finely set-up – twist even if we all anticipated a twist by this stage in the series anyway.

The short stories themselves are a stronger and more twisted batch than Black Ship’s castrated selection, but then they aren’t restricted to sea-themed scares this time around. From malicious mannequins (“Gerald”) to botanical beasts (“The Glasshouse”) and ferocious fairies (“The Little People”), I was particularly impressed by the variety of imaginative devices employed, even if they are all familiar tropes of the horror genre. 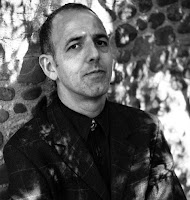 My personal favourite chapter was “A New Governess”, which really captured the creepiness of Victorian-era ghost stories such as The Turn of the Screw and genuinely made the hairs on the back of my neck stand on end. “Gerald”, too, was a devilish voodoo delight at making the innocent deadly, and “Sister Veronica” shocked me in its tortuous brutality because it was the only story which didn’t imply supernatural phenomena (rather juvenile malevolence) in its all-too-plausible horror.


In a CR@B Shell: A strong end to a superb trilogy; Tales of Terror from the Tunnel’s Mouth makes the horrific entertaining without sugar-coating the frights, and I don’t care if it’s meant for a teen audience – I loved it, and I’m exceedingly jealous of Chris Priestley’s effortless knack for sumptuously poetic and evocative prose!
aaaaa
Created by ~ CR@B Howard ~ at 01:02