Every Concert Tells a Story 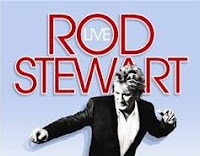 At 4:15pm on Wednesday night I was sitting at work thinking the evening ahead consisted of a meeting and a trip to see The Hangover: Part II at the cinema. I had no plans of seeing Faces rocker Rod Stewart live in concert – either that night or any other, if I’m being brutally honest. My Uncle is a huge fan and he has played his The Very Best of… CD on many a family get-together, but otherwise the suggestion of attending a gig hadn’t even crossed my mind. Particularly not at £60 a head!

Then I received a phone call: my aunt’s friend had come down sick and they wanted to know if I fancied taking her place. Well, I considered: why not? Within the hour I had contacted those who would be affected by my last minute change of plans; I was home, changed, fed and on my way to the home of Norwich City Football Club with a ticket in my hand and no idea of what to expect from the forthcoming entertainment.

Upon informing people of my destination, I was surprised by the backlash of sneers and apathy aimed at one of the most successful performers of all time (17th, according to Billboard). Granted, I may not be a *huge* Rod Stewart fan myself, but his music is fun, jaunty, amiable and hardly offensive to any genres – what’s to sneer at?

You may be surprised by just how many of Mr Stewart’s vast back catalogue of hits you do actually know: “Maggie May”, “You Wear It Well”, “Sailing”, “Do Ya Think I’m Sexy?”, “Handbags and Gladrags”, “I Don’t Want to Talk About It”, “Some Guys Have All the Luck”, “The First Cut is the Deepest”; these are all iconic tracks and perhaps the man – now in his fifth decade in the industry – isn’t given the credit he deserves?

Arriving at our none-too-shabbily-positioned seats to the rear of the Canary’s stadium at 7:40pm, the “support act” was already playing; an anonymous tuxedo-ed string crew akin to the Glenn Miller band. Perhaps it was because they had already started when we sat down, or because people were still milling about finding their seats, but I wasn’t at all impressed. They conjured no atmosphere of excitement and failed to engage 90% of the crowd. When Rod played Earl’s Court a couple of years ago he had Chrissie Hynde and The Pretenders opening for him – did the budget not stretch that far this time around? 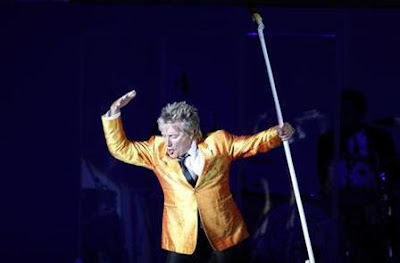 After a surprisingly brief fifteen minute change-over, the main man took to the stage at 8:15pm. At 66 you have to admire his energy: he performed a blistering two hour set with no formal interval and just two brief wardrobe transformations. All his greatest hits were included (at least I didn’t consciously notice any glaring omissions), as well as a smattering of fan favourites and jazzier Great American Songbook selections. Please don’t ask me for a comprehensive set-list, though.

As we edge ever closer to summer, however, I did feel that the atmosphere was tainted by the daylight, which stuck around well into the second hour. Unavoidable in an open top stadium, granted, but it reduced the spectacle of the stage lighting and giant video projection screen – as well as highlighting just how many people felt the need to wander about during the show!

Now, I understand that *some* people may need the loo (I even did at one point – surprise, surprise), it’s unavoidable, but there was never a time when there wasn’t a mob of people walking/skipping/dancing down the stands or across the open space at the rear of the on-pitch seating – were people really that blasé about missing the performance and that bloody desperate for alcohol? Really??!!

Rod has long been renowned for his raspy voice, but I also don’t believe the sound system did him any favours on Wednesday. Again, it could be down to the fact it was an open-top stadium rather than an arena, but he often sounded muffled (particularly when speaking to the audience) and was over-powered by the orchestration. He was also clearly upstaged by his powerful female backing singers who he often left to ad-lib or reach the high notes for him.

But then he is approaching 70, and his vivacious energy could not be faulted, even if his performance (and humorous lack of finesse at dancing) occasionally could. Following a rousing sing-along encore of “Sailing” (what else?), we spilled out of the ground at 10:15pm and straight into utter gridlock in the car park for what felt like hours. Three car loads of irate drivers nearly came to blows as a Land Rover tried to edge into the queue and nicked the bummer of a Micra! It was the kind of atmosphere-sapping palaver which puts a real downer on a night; but at least we got some chips out of it!


In a CR@B Shell: With a remarkable canon of sing-along classics at his disposal, it’s a shame that the lack of atmosphere and questionable sound system at Carrow Road tainted an animated performance from a punk/rock veteran who just refuses to retire.
aaaaa
Created by ~ CR@B Howard ~ at 02:16