Forest of the Damned 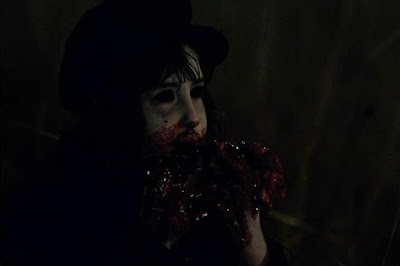 [SPOILERS] The quintessential rule of Zombie Film School 101, obvious to any fan of the popular horror sub-genre, is that zombies are the reanimated, braindead corpses of the recently perished; lumbering, rotting cadavers with one sole aim: to feast on your flesh and slurp down your intestines like stringed sausages. They aren't your family or friends anymore, merely people-shaped shells. Shells with teeth.

By that logic, the long-departed juvenile miners in Zombies who haunt the Pennsylvanian forests surrounding the abandoned mine they were buried in 100 years previous aren’t strictly zombies at all. Heck, they don't even pass on their unearthly infliction through biting! Cannibalistic ghosts, yes – ghastly, gore-guzzling ghouls even – but not zombies; even if the petrified locals do (mis-)use the blanket term in lieu of a more fitting description. But trust interfering studio heads not to care a jot about the details, believing a film with a bold-but-generic title would sell better than one called Wicked Little Things. The fools.

Lazy branding aside, this 2006 effort from the director of the Prom Night remake is a surprisingly efficient little B-movie. I say surprising not because I was expecting the After Dark Original title to be bad, but because it exceeded my expectations for a direct-to-DVD splatter flick. The film also affords Chloë Grace Moretz (Kick Ass, Let Me In) an early screen role as the youngest daughter of the recently widowed Karen Tunney (Lori Heuring), who is in the process of relocating herself and her two children to a ramshackle backwater cabin after the deeds were discovered amongst her deceased husband’s papers. 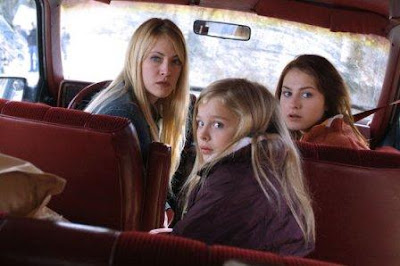 The cagey locals in the nearby village of Addytown are less than welcoming, their "new" old home is a dilapidated rat-filled dive and someone has smeared blood on their unlockable front door. Nevertheless, the Tunney trio try their best to accept what life has dealt them – until little Emma (Moretz) goes walking in the encircling woods one day and befriends an inhibited young girl called Mary who she says has lived for many years in the long-collapsed mine shaft…

While the picture is sometimes a little too dark to discern details and the dirt-encrusted pick-axe waving youths are anything but frightening, what impressed me most about Zombies is the layering of the script and the pace at which it unravels its grisly truths, from the unearthing of a box of old newspaper clippings in the Tunney’s basement to the sickening sight of a half-devoured pig which secretive neighbour Harold (Geoffrey Lewis) uses to placate the flesh hungry lil’ nippers at night.

Basically, the ghoulish brood want revenge on the descendants of the Charlton family – owners of the mine which was blown up in 1913 despite them knowing the immigrant children were still inside and would perish in the blast – and they won’t rest in peace until they get it. Quite why that means they suddenly develop a taste for human tissue is anyone’s guess, but they have clearly worked up quite an appetite after a century underground and it makes a nice change for a supernatural foe to be somewhat ambiguous and unpredictable.

I was also impressed by the strong chemistry shared between Heuring, Moretz and Scout Taylor-Compton, who plays teen Sarah Tunney – a disgruntled madam with an attitude who initially dismisses her mother’s concerns about the Addytown zombie myth, until the car her and her three friends are toking in is set upon by the ravenous monsters and she barely makes it out alive. The female trio interact well together and you truly believe they are a family unit who are looking out for one another since the devastating loss of their patriarch.


In a CR@B Shell: It’s not perfect and it’s rarely frightening, but Zombies does possess that vital ingredient absent from most modern genre B-movies: a decent well-devised story. Ignore the irritatingly nondescript title and give these wicked little things a whirl – if nothing else, they make a damn persuasive argument against child labour!
aaaaa
Created by ~ CR@B Howard ~ at 13:40